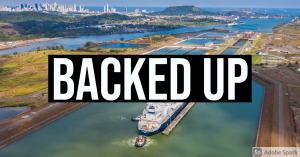 COVID has disrupted shipping supplies and the flow of goods and services around the world, but it is not just COVID that is causing this. According to FreightWaves, a series of delays at the Panama Canal, one of the most important shipping passages in the world, is causing major backups in the trade supply chain.

Since the Panama Canal debuted its larger Neopanamax locks in 2016, the three heaviest users have been container ships, liquified natural gas (LNG) carriers and liquefied petroleum gas (LPG) carriers. Now, transit demand for all three segments is simultaneously surging. On top of that, COVID issues are reportedly affecting canal operations.

The consequence over the past month and a half: transit delays.

The good news for containerized cargo shippers is that container lines have reserved booking slots. The delays are affecting ships without reservations.

The good news for LNG and LPG shipowners is that delays are actually a tailwind for returns. Every day a bulk-cargo ship is stuck waiting at anchorage off Panama is a day less it can vie for spot contracts at the end of its voyage. Less competition equals higher rates.

Panama Canal congestion is also spurring more LNG and LPG carriers to take the long route to Asia around the Cape of Good Hope. Longer voyages soak up more vessel capacity, another plus for rates.

Argus Media reported that delays were partially driven by “tugboat crew staffing complications induced by COVID-19 [that are] limiting the number of simultaneous transits just as seasonal factors like increased container shipping and higher LPG heating are increasing demands on the canal.”

FreightWaves asked the Panama Canal Authority (ACP) for comment on reports of COVID-related issues impairing operations. It stated that the Argus report on transit limitations is not true. It insisted that its COVID-19 safety measures have allowed operations to continue safely without interruption.

Asked about causes of congestion, it cited a confluence of higher container traffic and LNG traffic. “Like at many ports around the world, we see this as a temporary situation driven by the effects of the pandemic [on consumer demand].”

The ACP also blamed the weather. “Hurricanes … delayed shipments that then arrived at the Panama Canal simultaneously,” it said. It added that Panama is at the end of its rainy season “and there have been more days with seasonal fog than last year.” (source)

As the trend of rising prices due to currency devaluation and emptying shelf space builds because of a lack of goods, producers, or available buying power (as businesses are hurting as much as the consumer is, and in some cases even worse), disruptions such as this, while small, can have major impacts on economic trends. Since spending drives the economy, and given that the dollar has already significantly weakened and is estimated that this trend will continue in 2021, any disruption, even small ones, to the consumer-purchase chain at this point will have major impacts because the economy is so dependent on it and it is in such poor condition.

I am not saying to go out and buy stuff. This problem is unsolvable save by default or currency annihilation. What I am saying is that small trends, such as a tiny back up even far away, can and to tend to exacerbate already existing trends and blow them up into something terrible when in normal conditions, they would just be a minor interruption and not something to worry about in terms of financial stability.

Economically speaking, a trend for 2021 will not be any sort of “improvements” to the current state of affairs, but rather, more of the same, except while COVID will eventually pass away, the damage caused by the response to it will not, and existing problems will only compound the effects that were already existing but the pandemic exposed, such as this disruption, and eventually- probably in three to five years -most likely will force a reckoning with the public debt, and when this happens, be ready because anything can happen.