You are here: Home › Jewish Cult Leader Has Child Stripped And Beaten For Hours, He Has Children Starved And Even Prohibits Sick Children From Taking Medicine. In The Middle Of His Trial He Flees To Guatemala

By Shoebat on December 5, 2020 in Featured, General 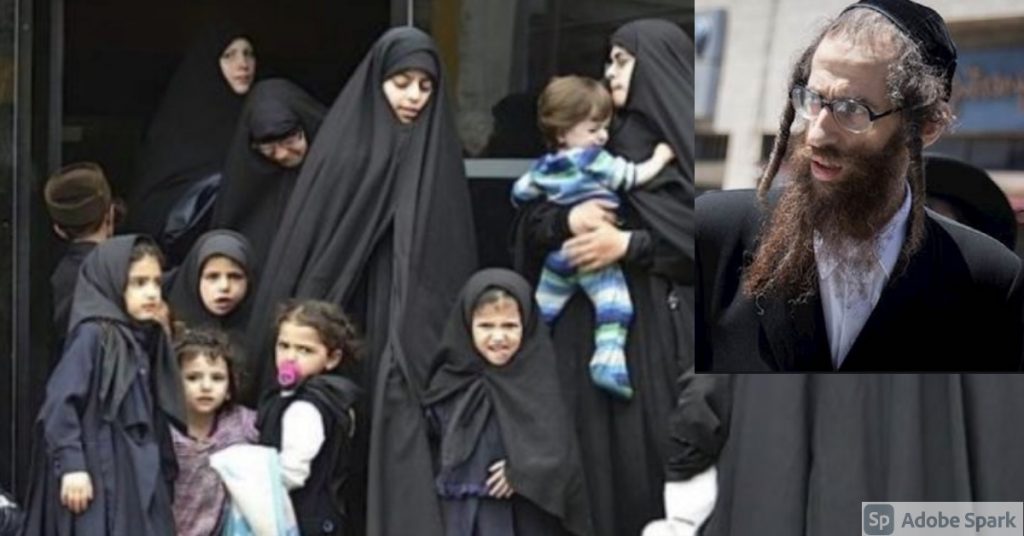 Rompler (right), a rabbi and cult leader. You would think that the veiled women are in Iran, but no this is how women in the Jewish cult, Lev Tahor, are required to dress.

A Jewish cult leader in Israel, Rabbi Elazar Rompler, was horrifically abusing children. He had one child stripped and beaten for hours, and this was not uncommon in his reign of terror. Children were starved and sick children were deprived of the medicine that they needed. In the middle of this despot’s trial, he fled to Israel. As we read in the Times of Israel:

A member of the Hasidic Lev Tahor cult has escaped Israel and traveled to Guatemala, his lawyer said Tuesday, six months after he was indicted for abusive behavior against 9- and 10-year-old children.

Rabbi Elazar Rompler, 46, was charged in May at the Jerusalem District Court with assaulting and abusing children mentally and physically in 2009-2011, when he served as the principal of a school belonging to the fringe community in Canada.

A former cult member has said Rompler, who was in charge of kashrut, would starve children by forbidding them from eating almost everything. He also allegedly barred some from taking medicine — even when urgently needed — without his written approval.

In one case, according to the indictment, Rompler had a child stripped, tied up and beaten for several hours over suspicions he stole money from a charity money box.

In another, he is accused of instructing other teachers to hold a child down and beat him repeatedly for allegedly lying about needing eyeglasses.

This cult, Lev Tahor, has been fleeing the law from where ever they settle. Their founder, Shlomo Helbrans, began his cult in New York and was eventually sentenced to prison for kidnapping a 13 year old boy. He served two years and was released after getting preferential treatment from the administration of  New York governor George Pataki. He ran a Yeshiva in Monsey, New York and was eventually deported back to Israel. From Israel he went to Canada where he settled in  Sainte-Agathe-des-Monts, Quebec. The cult fled Canada after allegations of child abuse, and then they went to Guatemala where, yet again, their presence was unwanted because of (you guessed it!) abuse. According to Haaretz:

After having been forced to abandon Israel, the United States and Canada amid accusations of child abuse, the radical ultra-Orthodox Lev Tahor sect is now under investigation in Guatemala, where it has been based for the past two years.

Guatemalan media reported that police had conducted a raid lasting several hours on the village where over 200 Lev Tahor members live. One unconfirmed report said children were taken away from their parents, and another said that Israeli officials were present during the raid.
The Foreign Ministry said in a press statement last night that Israel was cooperating with Guatemalan authorities.
“The Guatemalan authorities recently decided to investigate members of the community on suspicion that serious criminal offenses, including against minors, are being committed in the compound where they live,” the statement said. “The relevant Israeli authorities are in direct contact with the Guatemalan authorities and are following developments closely in order to ensure the welfare of Israeli citizens, most of them minors, who are in the Lev Tahor community’s compound in Guatemala.”

When they arrived in Guatemala they settled in a village called San Juan La Laguna where the villagers began not to like them very much. But this was not for no reason. The elders of the village said that the cult “wanted to impose their religion” and were sabotaging the Catholic tradition of the land.
If the Americans, Canadians and Guatemalans did not want this cult, it makes sense that Israel would not want them either.
print