You are here: Home › “Mystery Meat” Is Not A Joke Any More 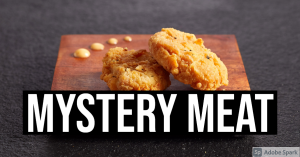 One of the long-running jokes in America about questionable food, especially in public school lunch rooms, is calling the meat “mystery meat” because you don’t actually know what it is, in spite of what it is labeled as on the box (and as one who had family who worked in public school cafeterias and for years processed the “government meat” shipments, I can attest that even she wondered often what the actual meat “product” was being served). But that said, it has generally been a joke.

But not anymore. According to TheHill, “lab grown” and “no kill” meat is now approved for sale in Singapore in a world first.

The company announced on Tuesday that after a rigorous consultation and review process its cultured chicken product has been approved for sale in Singapore as an ingredient in chicken bites.

The real chicken product is made from animal cells sourced through a biopsy of a live animal. The cells are then grown in bioreactors and fed nutrients including amino acids, carbohydrates, minerals, fats and vitamins, which then grow the cells into meat. The process doesn’t require the slaughter of any livestock, providing a safer, healthier and more sustainable meat product, the company says.

“I think the approval is one of the most significant milestones in the food industry in the last handful of decades,” Eat Just co-founder and CEO Josh Tetrick said in a statement.

“It’s an open door and it’s up to us and other companies to take that opportunity. My hope is this leads to a world in the next handful of years where the majority of meat doesn’t require killing a single animal or tearing down a single tree.”

Eat Just says no antibiotics are used and its cultured chicken has an “extremely low and significantly cleaner microbiological content than conventional chicken.”

The approved chicken bites will initially debut in a Singapore restaurant with plans for wider expansion into retail establishments.

The move comes during a time of heightened awareness about the meat industry’s effects on the environment.

Alternatives to traditional meat products have been growing in popularity recently among fast-food chains.

There are multiple trends yet to be seen for this, including on the farming industry, meatpacking, and foods in general. However, the biggest concern should be, what will be the health effects of this? It is one thing to eat a real animal. It is another thing to eat…mystery meat grown in a lab. One may want to remember that while this may not involve killing an animal, it could possibly have serious, adverse health consequences for the one who consumes it. After all, if one can grow meat in a lab from an additive, what is not to say that additive could not attach itself to you, and grow inside of you causing things such as cancer, or perhaps worse?

What I am saying is that this trend is potentially highly dangerous for the future, but given the trend moving towards consolidation, and even direct threats to farming, the fact is that this development may be something to watch, not into itself, but as something much greater.

Jewish Cult Leader Has Child Stripped And Beaten For Hours, He Has Children Starved And Even Prohibits Sick Children From Taking Medicine. In The Middle Of His Trial He Flees To Guatemala
Will OnlyFans-Style Sites Become A New- And Perhaps Better -Social Media Format?
Follow