You are here: Home › Ethiopia, Balkanization, Migration, And The Future 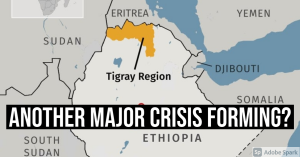 Ethiopia is, historically speaking, a populous and powerful area in Africa. The ancient Cushite lands that include Ethiopia proper, Eritrea, and Djibouti have been fought over by regional and international powers. It was first the Italians who carved Eritrea from Ethiopia, and later the French who successfully following a failed Russian attempt, carved Djibouti from the remainder of the same area. Now, with an over a century long conflict in Tigray owing, to, from the Tigrayan perspective, neglect from the rest of Ethiopia, and considering the water rights conflict that Ethiopia is having with Egypt, alongside the historical struggling between NATO and the USSR for influence in Ethiopia, the nation is again being pulled back into the global struggle for power.

This has come at a great human cost with much violence and now even with Tigray under supposed control by Ethiopia forces, tales of genocides being told and according to the New York Times, at least two million refugees scattered.

Mr. Ashenafi and dozens of other Tigrayan refugees fled the violence and settled outside the remote and dusty town of Hamdayet, a community of just a few thousand people near the border, where I spoke to them. Their firsthand accounts, shared a month after Ethiopia’s prime minister, Abiy Ahmed, declared war on the Tigray region, detail a devastating conflict that has become a grisly wellspring of looting, ethnic antagonism and killings.

Many of the refugees have lingered here rather than moving on to the more established refugee camps farther into Sudan, staying closer to home so they can get any news about their towns or missing loved ones. But little information is getting out, with mobile networks and the internet blocked for weeks by the Ethiopian government.

Nearly 50,000 have fled to Sudan so far, in what the United Nations has called the worst exodus of refugees Ethiopia has seen in more than two decades. And their accounts stand at stark odds with the repeated claims from Mr. Abiy, who won the Nobel Peace Prize last year for ending the border conflict with neighboring Eritrea, that no civilians are being hurt.

The Tigrayans describe being caught between indiscriminate military shelling and a campaign of killing, rape and looting by government-allied ethnic militias. Several told me that they saw dozens of bodies along the route as they fled their shops, homes and farms and took to the long road to the border with Sudan, in stifling heat. (source)

What I am going to give here in my opinion. It is not fact, and it is not to be taken as such, but as one perspective contributing to the “pot of ideas”, and nothing more.

Notice how, like with the situation in Nagorno-Karabakh, there has been a virtual information blackout from this war unless one directly looks for the conflict.

I wrote a long piece on the situation in Tigray, and the answer as to who is the “good side” in the conflict is that there are no good sides. Ethiopia is guilty of abuse but to portray Ethiopian Prime Minister Abiy Ahmed as a sort of potential war criminal, and suggesting that the TPLF is preferable is wrong. One must remember that the TPLF is originally a communist group who fought against other communists (the Derg) in an Ethiopian equivalent (but not directly so) of the Lenin-Trotsky conflicts in the early USSR. d

The TLPF’s most famous political figure right now is Tedros Adhanom Ghebreysus, the current head of the WHO who is directly tied to the COVID crisis and much of the questionable handling of it throughout the world. At the same time, it is his party that he is a part of which has been not just fighting Ethiopia, but has been accused of attempting to provoke war with Eritrea, Sudan, and even regional areas in Ethiopia by attacking civilian areas and by coercing their population to fight but centering the conflict in major Tigrayan urban areas, essentially using their own people has a human shield. In this case, it is to Ethiopian PM Ahmed’s credit that he urged civilians in Tigray’s capitol of Mekelle to flee in order to prevent a genocide during Ethiopia’s moved into the capitol.

So what it seems is happening here is that Ahmed is essentially being set up to be potentially blamed as a ‘war criminal’ for putting out a rebellion that could have legitimately destroyed Ethiopia as a nation, and given that she is a major power in East Africa, could completely balkanize the nation, rip her apart, and thrust her into an even worse conflict, potentially with foreign intervention. The question is, who would intervene?

Right now, the most likely persons could be a NATO-type coalition, similar to what has been going on with US and French troops in the Sahel region of Western Africa. However, considering that Egypt is arguably the third main recipient of US funds (after NATO and Israel), it may also involve Egyptian troops, of which such a case adds to the intrigue since there have been rumors (but with no provable evidence yet) that Egypt has been quietly supporting the Tigrayan rebels because of her current practical “cold war” with Ethiopia over Nile water rights.

Western intervention in Ethiopia could create a Balkan- or perhaps “Ukrainian” -type scenario where Russian and Chinese influence is cut out of the nation, conditions could be set up for expanding a conflict into Eritrea and Djibouti, thus necessitating ‘intervention’ there, and given the massive humanitarian crisis that is forming, considering how a large number of migrants from the 2015 crisis came from Eritrea, could provoke another major migrant crisis into Europe, but perhaps larger and more serious. This would further the goal of dividing the European community, promoting nationalism, and in the case of Germany, helping to aid the process of transitioning from nationalism to militarism, a pattern that we have warned about.

Consider also that Ethiopia, while it is an African nation known for its own internal problems (as it is common to almost all African nations), it is essentially a “stable” nation. If it can be successfully dismantled in the name of “humanitarian” actions, and potentially since this would take place under a Biden/Harris administration, not only would they potentially be able to receive accolades for it, but they may be able to use this as a threat to Erdogan, since Erdogan seems to have been backing Ethiopia against Egypt, as Egypt does not trust Erdogan’s Ottoman ambitions, and Europe, while wanting a strong Turkey as a hedge against Russia, does not want her to become “uncontrollable” and morph back into the “menace” she was in the past, which Erdogan is clearly attempting o do.

All of this is only potential ideas, but much or all of it could be easily accomplished with a strategic takedown of Ethiopia. It is politically useful that most Americans do not know or understand the dynamics of this conflict, so that it could give the appearance that Biden is somehow stopping a ‘war criminal’ (think the situation in Iraq and Saddam Hussein and how they were presented to the public) when it will be really an extension of a long-planned foreign intervention for nefarious purposes.

Ethiopia is home to about 110 million people. If they, a stable nation, can be taken down, no nation is safe, and with her balkanization will result in more war and, for the interest of the general public, an influx of refugees to Europe that may make 2015 and 2016 seem like a proverbial “drop in the bucket” when compared in the future, and possibly the largest wave in the continent’s history.

The Great Reset: The Rise Of Populism And The Technological Elite
…And Here We Are, Back In 2000
Follow