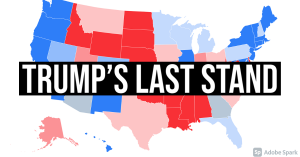 Throughout the buildup to this election, I noted repeatedly that the conditions appeared to be setting up for a repeat of an election 2000 type scenario, where President Bush was installed into office not because of a clear win, but due to intervention by the Supreme Court. I have said consistently that while the chances favored Trump- and not by a lot -that the election because of the combination of rancor, potential abuse, and other elements made the election too close to call until further information came out that would favor one side or the other. Likewise, I have attempted to be clear that while so far the ‘consensus’ is that Biden won and that because of such one must assume that come January he will be recognized as the next president, it is still not technically over for Trump.

So exactly two decades later, the US is in the same position now, except instead of five (Florida) counties at stake, it is the results of (in general) five states as a part of a lawsuit brought by seventeen states contesting the result of the election to the Supreme Court, where it appears that it will be the court that has the final say on if Trump remains in office.

President Donald Trump on Wednesday latched on to a longshot Texas lawsuit seeking to overturn a presidential election that handed the White House to Joe Biden.

Legal experts say Texas Attorney General Ken Paxton’s effort to contest election results of four key battleground states is all but certain to fail. But it has drawn support from the Republican attorneys general of 17 other states.

As the president’s legal team loses case after improbable case in federal district and appellate courts, the Texas lawsuit offers a major advantage: It goes straight to the top. Under a special legal avenue unique to states, Paxton filed the case directly with the U.S. Supreme Court, a body Trump has suggested could deliver him the victory that voters did not.

“This is the big one!” the president tweeted Wednesday morning, promising to get involved in the case.

The Texas lawsuit takes issue with changes to election procedures in four battleground states: Georgia, Pennsylvania, Michigan and Wisconsin. Paxton argues those changes were unlawful and call into question Biden’s victories in those states. He is asking the high court to block the critical battlegrounds from participating in the Electoral College.

Though the Supreme Court has a six-member conservative majority, including three justices appointed by Trump himself, it has so far shown no interest in siding with him in the election cases his campaign has lobbed. On Tuesday, it decisively rejected Pennsylvania Republicans’ effort to overturn Biden’s victory there, in a one-sentence order with no dissents.

Legal experts and court watchers expect a similar outcome in the Texas case. The court has asked for a response from the four battleground states Texas is suing, setting a Thursday deadline, but has given no indication about how it will decide the matter. (source)

Now I will say that, from a trend perspective, Trump has a weak case, considering his consistent losses in the lower courts in spite of blatantly obvious evidence that more than just a few questionable things took place at the ballot boxes in key states.

That said, the election drama is NOT over until it is over. It would be wrong of me to say that Trump could not win because he still could.

To that, I must add my final point, which is that as I have said before, the real winner of this election is the loser. This likewise applies if the Supreme Court finds that Biden lost and Trump won. It does not matter what the party is, but that whichever party is chosen to sit in the White House, that is the party that loses long term because that person will be likely forced to deal with extremely hot-button economic and political issues for which there is no desirable solution and because all of the roads lead to pain in some form, whoever’s party is in office is going to get blamed for the problems. There is no way around this.

Whatever happens, remember that the fundamentals are the same in all cases. Things are not getting better, the process of extreme politics with economic decline is going to continue without cessation for now, and that this will eventually lead to serious conflicts, domestically as well as in the world, since problems in the US inevitably have major impacts on the world economic and political situation.

In Trump’s case, perhaps the hardest lesson will come for him, for as it seems he is being forced to learn, is that politics and long-standing political plans are bigger than his ego, and one does not always get what one wants.

Ethiopia, Balkanization, Migration, And The Future
So It Begins- Americans Begin Stealing Out Of Desperation
Follow