You are here: Home › So It Begins- Americans Begin Stealing Out Of Desperation 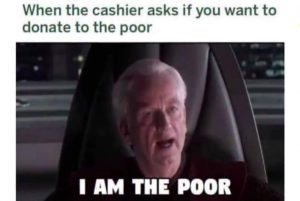 I have said for a while that people are going to get desperate and times will be very tough. This is the reality for a significant bloc of the population and it is not getting better. People are suffering. They hurt, and suffering people dealing with shock and who are scared do desperate things.

For years, I warned that street violence could become an issue, and according to the Washington Post, it is now as Americans who never considered it before are starting to steal in order to provide for themselves.

Early in the pandemic, Joo Park noticed a worrisome shift at the market he manages near downtown Washington: At least once a day, he’d spot someone slipping a package of meat, a bag of rice or other food into a shirt or under a jacket. Diapers, shampoo and laundry detergent began disappearing in bigger numbers, too.

Since then, he said, thefts have more than doubled at Capitol Supermarket – even though he now stations more employees at the entrance, asks shoppers to leave backpacks up front and displays high-theft items like hand sanitizer and baking yeast in more conspicuous areas. Park doesn’t usually call the police, choosing instead to bar offenders from coming back.

“It’s become much harder during the pandemic,” he said. “People will say, ‘I was just hungry.’ And then what do you do?”

The coronavirus recession has been a relentless churn of high unemployment and economic uncertainty. The government stimulus that kept millions of Americans from falling into poverty earlier in the pandemic is long gone, and new aid is still a dot on the horizon after months of congressional inaction. Hunger is chronic, at levels not seen in decades.

The result is a growing subset of Americans who are stealing food to survive.

Shoplifting is up markedly since the pandemic began in the spring and at higher levels than in past economic downturns, according to interviews with more than a dozen retailers, security experts and police departments across the country. But what’s distinctive about this trend, experts say, is what’s being taken – more staples like bread, pasta and baby formula. (source)

I’m not saying stealing is good. Nor am I saying that people in other countries have not suffered more than what the average case of man in poverty in the US is in many cases. What I am saying is to put yourself in that person’s shoes and try to see what is happening through their eyes. It’s easy to think about what “I would do if it was me”, versus to actually walk in that same position, because even in the US, especially for people who fall into hard times and are trying to work their way back into a ‘normal’ life pattern, it is extremely hard and comes with great efforts.

For years, there has been a disconnect between wages and job requirements. Somewhere, we decided (probably in the early 1970s-ish) that certain people who do certain low-level jobs did not have the same value as those who did others, and they still had to do the same and more work but for continually less pay. This manifested through a series of policies, but the result is the same- that one can spend one’s life working 12 hour days at 40 hours a week plus overtime in back-breaking jobs for pay that one cannot ever hope to rent a home in, and if one does, at great personal risk and little room ever for advancing oneself, only to have one’s life upended if ANY accident should happen.

COVID is what ‘broke the back’ of these people, of which there are millions who are unwillingly in this position. Now, with the effects of the virus, there is nothing more they can do to survive other than, in many cases, to partake in criminal or dangerous activities. It’s not a surprise that OnlyFans is so popular now- because it is an extension of the same phenomenon driving desperate moves by poor people.

It is Christmas, and things are not going to be better for 2021. That said, it is important to remember to have compassion for men, and to be grateful that one is not in the position of the many impoverished masses, for even the wealthiest of men in such hard times are often a lot closer to slipping away than they think, because it is often not one action, but a series of three or four unexpected events that even if well prepared for, can rip a man from his footing and leave him wondering where he must go next. It is also a good thing to remember that these people are often the protagonists of any major social change, since having little more to live for and desperate, they are willing to take drastic measure because to them, what other options do they have that might actually work?

…And Here We Are, Back In 2000
Will The Radio Signals Go Dark?
Follow