You are here: Home › Manhattan DA ‘Tightens The Screws’ On Trump Investigation 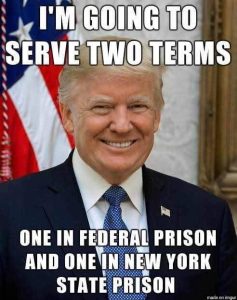 Trump has attracted much attention after he became president, but sometimes that is not a good thing. According to Dnyuz, the Manhattan DA is proverbially speaking, in the process of ‘tightening the screws’ on Trump as his investigation into the President’ finances and business dealings continue.

State prosecutors in Manhattan have interviewed several employees of President Trump’s bank and insurance broker in recent weeks, according to people with knowledge of the matter, significantly escalating an investigation into the president that he is powerless to stop.

The interviews with people who work for the lender, Deutsche Bank, and the insurance brokerage, Aon, are the latest indication that once Mr. Trump leaves office, he still faces the potential threat of criminal charges that would be beyond the reach of federal pardons.

It remains unclear whether the office of the Manhattan district attorney, Cyrus R. Vance Jr., will ultimately bring charges. The prosecutors have been fighting in court for more than a year to obtain Mr. Trump’s personal and corporate tax returns, which they have called central to their investigation. The issue now rests with the Supreme Court.

But lately, Mr. Vance’s office has stepped up its efforts, issuing new subpoenas and questioning witnesses, including some before a grand jury, according to the people with knowledge of the matter, who requested anonymity because of the sensitive nature of the investigation.

The grand jury appears to be serving an investigative function, allowing prosecutors to authenticate documents and pursue other leads, rather than considering any charges.

When Mr. Trump returns to private life in January, he will lose the protection from criminal prosecution that his office has afforded him. While The New York Times has reported that he discussed granting pre-emptive pardons to his eldest children before leaving office — and has claimed that he has the power to pardon himself — that authority applies only to federal crimes, and not to state or local investigations like the one being conducted by Mr. Vance’s office. (source)

Political or not, regardless of the motivations, this is not good for Trump.

Trump has tended to isolate himself from not just other politicians, but his own party and the history of presidents that came before him who are still alive. I am not saying they all should like or agree with each other, but Trump’s behavior has been so outrageous and yet, having failed to follow through on his promises at all as well as to seemingly spend more time trolling people than actually dealing with real matters has angered the public against him to a point that people do not care and he has likely become a political liability. This seems to be the reason why the GOP will not back him- it is not about being “anti-Trump”, but rather dumping the “cult of Trump” that build up around him so they can remake their image because, while one can never know absolutely for sure until further information is obtained, it is not an unreasonable explanation or thought process. The trend really then is to see a modified GOP and possibly, with the passing of the Boomer generation, the passing of the remnants of “Trumpism” for something more extreme and serious, politically speaking.

Trump has had his time for fame, and while he has many supporters, politics is bigger than he. He is still just a man in a larger game that is far bigger than his ego, and if he continues to talk, he may find himself not returning to Mar-A-Lago, but potentially figuring out how to pay off his debts and possibly with nothing, for truly, as the investigations have confirmed, the wealth that Trump has does not seem to be in his bank account, but in his perception of wealth and luxury that he has marketed successfully to the public but of which the capital is now running low in said genre and he is trying to scrape by with what is left before the debt collectors come calling.