You are here: Home › Scientists Successfully Do First Ever ‘Quantum Teleportation’ 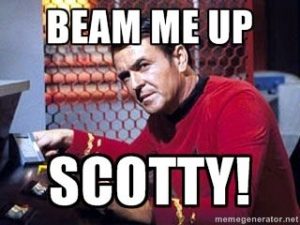 In many science fiction stories and movies, the concept of “teleporation”, where a person or object is sent to a far distance through a machine in particle form -may seem unrealistic or fanciful. Then again, so did the telephone, television, automobile, and many other things. Now according to one recent article from the UK Daily Mail, American scientists have been able to sent particles faster than the speed of light in the first ever ‘quantum teleportation’.

Scientists have demonstrated long-distance ‘quantum teleportation’ – the instant transfer of units of quantum information known as qubits – for the first time.

The qubits were transferred faster than the speed of light over a distance of 27 miles, laying the foundations for a quantum internet service, which could one day revolutionise computing.

Quantum communication systems are faster and more secure than regular networks because they use photons rather than computer code, which can be hacked.

But their development relies on cutting-edge scientific theory which transforms our understanding of how computers work.

In a quantum internet, information stored in qubits (the quantum equivalent of computer bits) is shuttled, or ‘teleported’, over long distances through entanglement.

Entanglement is a phenomenon whereby two particles are linked in such a way that information shared with one is shared with the other at exactly the same time.

This means that the quantum state of each particle is dependent on the state of the other – even when they are separated by a large distance.

Quantum teleportation, therefore, is the transfer of quantum states from one location to the other.

However, it is highly sensitive to environmental interference that can easily disrupt the quality or ‘fidelity’ of teleportation, so proving the theory in practice has been technologically challenging.

The system comprises three nodes which interact with one another to trigger a sequence of qubits, which pass a signal from one place to the other instantly.

The ‘teleportation’ is instant, occurring faster than the speed of light, and the researchers reported a fidelity of more than 90 percent, according to the new study, published in PRX Quantum.

The findings of the project are crucial to hopes of a future quantum internet as well as pushing the boundaries of what scientists known about the quantum realm. (source)

This is a small thing, but scientific inventions and innovations such as this one can evolve into something big. It must have seemed strange when Marconi boasted about being able to make a trans-Atlantic broadcast, but he did it, and his actions paved the way for modern radio.

Never underestimate what is possible.

Study: 55% Of Americans Say That 2020 Was A Financial Disaster For Them
Everyone Needs An African Friend
Follow