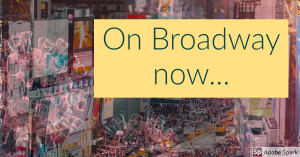 The effects of COVID-19 are going to hit the economy for a long time. As we and others have noted, massive bankruptcies are happening and should be expected to continue, and some of the bankruptcies will surprise people. Two interesting effects were recently reported by MSNBC, which include the bankruptcy of the famed Cirque du Soleil, and the fact that Broadway is shutting down until at least 2021.

Cirque du Soleil, established in Canada, is seeking Chapter 15 bankruptcy protection in the United States to facilitate a “stalking horse” purchase agreement negotiated with its existing shareholders in an attempt to draw in more investment.

Broadway shows will remain dark through the summer

The company will also create a $15 million employee fund to provide financial assistance for the almost 3,500 employees who have been laid off.

Like live production companies across the country, Cirque du Soleil’s revenue flow ground to a halt as states issued stay-at-home orders to stem the spread of the coronavirus. The company suspended many of its worldwide shows in March before announcing the temporary suspension of its resident shows in Las Vegas.

Cirque du Soleil’s bankruptcy announcement comes on the heels of New York City’s Broadway shutting down through January 3, 2021 as hope fades for a rapid end to the spread of the virus. (source)

As I have said before, this is just the beginning, as the effects of this virus is exposing the social rot and it is going to fundamentally reshape the economy and what is known as the American way of life.

Not Good- Some Members Of Congress Begin To Discuss Giving “Reparations”
Swedish Elderly Care Centers Are Deliberately Not Sending Elderly People With COVID-19 To The Hospitals. Instead They Are Letting Them Die Or Injecting Them With Chemicals That Kill Them
Follow