You are here: Home › Not Good- Some Members Of Congress Begin To Discuss Giving “Reparations” 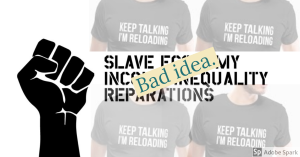 “Reparations” is a toxic word among many people in American politics, left or right, because it tends to bring out the worst forms of racialism in both. However, according to a story from The Hill, some members of Congress are using the current situation as an opportunity to talk about giving “reparations”.

Legislation exploring whether Black Americans should receive restitution for slavery may soon get a huge boost, as a growing number of Democrats are hoping to move reparations this summer as another response to the death of George Floyd.

Members of the Congressional Black Caucus (CBC) will huddle Wednesday to discuss their next legislative steps as Democrats seek to confront racial inequality following the police killing of Floyd last month.

Rep. Sheila Jackson Lee (D-Texas), the lead sponsor of the reparations bill, H.R. 40, said her proposal is attracting greater interest within the caucus since Floyd’s death, which sparked mass protests for racial justice around the country and the globe. She’s hoping to tap that energy to bring her bill to the floor for a historic vote before year’s end.

“We now have an opportunity, through H.R. 40, to have the highest level of discussion about systemic racism and race. And we are able to do it in a manner that is bringing people together; that acknowledges that Black lives matter; and acknowledges that there has to be a response,” Jackson Lee said Tuesday.

Since Floyd’s death on May 25, House Democrats have already approved several proposals designed to tackle racial disparities and social injustice across different facets of American society, including legislation to overhaul the criminal justice system and expand access to health care.

Party leaders have also scheduled a vote this week on a sweeping infrastructure package, which includes provisions aimed at boosting both the economy and access to services in poor, minority and other vulnerable communities. (source)

If people are seriously going to talk about “reparations”, I have my own request. After all, as the descendant of ethnic Poles who fled from both the tyranny of the Prussian Empire under the Kulturkampf, the Soviet tyranny from the Bolsheviks, and not to mention the centuries of destruction from the partitioning of Poland going all the way back to the medieval invasions of Poland by Germany, am I not entitled to not centuries, but almost a millennia of “reparations” from Germany, Russia, Austria, and (in some cases) Ukraine?

What about the English? People talk about how once the “sun never set(s) on the British Empire”, but for four-hundred years- the same time expanse that many Afro-Americans talk about slavery or ‘oppression’ in the US -the English were under the rule of the Romans. After all would it not be wrong to deny the British a fair claim from the Italians for centuries of Roman oppression? And don’t even start with the Norwegians, Swedes, Danes, and the French, for after all, do they not owe the British for centuries of Viking raids and in the case of the latter, the invasion of England in 1066 by William the Conqueror?

But what about Russia? Russia may be an Empire, but what about her abuse at the hands of the Turkic tribes and mongolians, the latter of which enslaved Russia for four centuries? Does Russia not have a legitimate and good claim for reparations from Turkey, all the Central Asian nations, and Mongolia for centuries of destruction?

Likewise, what about the Indians? Does India not have a claim for ‘reparations’ not just from the Moghuls and Turks, but what about from Iran- after all, it was the Aryan invasion of India that destroyed a lot of the ancient and native Dravidian culture many millennia before Christ that forever altered their identity?

Now one might say that these examples are ‘exaggerations’, but they really are not. All people have ancestors that were both enslavers and the enslaved, no matter where one goes. This is a fact of human existence, and it still exists today, except instead of using chains, whips, and bats, it uses debt, credit cards, and loans, and all of it has the same effect.

In the American case, if one is going to talk about “reparations”, then it is dishonest to discuss anything without making demands of the nations of West Africa, from Senegal to Congo, because it was not “white men” with nets walking around the jungles of Africa seeking innocent black men to put in cages, but it was the nations themselves, and many powerful tribes in those nations who sold their enemies by consent to the Europeans or traded with them for goods. The nation of Togo, historically called Dahomey, built a veritable empire because of the slave trade with Europeans- even PBS admits this.

Any talk of “reparations” in the US is dishonest and needs to be dismissed because it is not about the objective good of American blacks, as it ignores the suffering of many enslaved people of European descent (not just Slavs, but the many Scot-Irish slaves in the US who were forced into work along with the West Africans), but actively fuels the worst forms of racism among both black and white.

What is needed now truly is, as many have said, real understanding, and a de-escalation of tendencies to violence. This is not happening, and throwing “reparations” on the fire of political and social discourse is absolutely the last thing that anybody needs right now, since it will not help anything other than furthering the conditions for racial conflict. I absolutely cannot emphasize this point enough, because racial tension and racism is not the answer to the problems we are facing today, but what is causing the problem.

All men- black, white, and those in between -are made in God’s image and likeness. All sin, all do bad things, and all are in need of forgiveness and well as forgiving others. Holding grudges or using grudges to justify political or economic policies is wrong and if persisted in will lead to the destruction of both at their own hand.