You are here: Home › So When Does Ghislaine Get COVID-19? 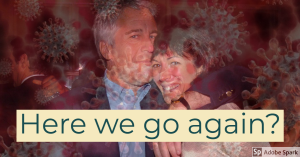 Right now, there is a lot of talk about the state of Ghislaine Maxwell, the partner-in-crime of the infamous billionaire pedophile and pimp for the rich or powerful Jeffrey Epstein. As Forbes Magazine speculates, she may choose to talk at her upcoming trial, and the implications could be severe, especially for the British Royal Family.

What that possible deal would look like is anybody’s guess at this point, but no matter what happens, as a close friend of the accused for many years and as a man who pointedly emailed Ms. Maxwell in 2015 for information about Virginia Roberts, Prince Andrew and Buckingham Palace’s very best solicitors will be well-advised to reconsider the prince’s legal and public relations liabilities, and with particular care should his old friend Ghislaine Maxwell find that it is in her interests to talk. (source)

Ghislaine is a major target because of all that she knows about many people, and the fact that Epstein was not only admitted to be with intelligence by Alex Acosta, but Ghislaine is the daughter of the founder of Israel’s intelligence service, Jan Hyman Hoch, also known as Robert Maxwell.

Jeffrey Epstein was pronounced “dead” in his cell, but as many have noted, the circumstances were highly suspicious. For example, the cameras in his cell just happened to “lose power” for fifteen minutes while he “died”, at which time his body was quickly taken away, pronounced “dead” by suicide, and buried in an unmarked location in a Jewish cemetery in Florida without any public inquiry at all. In spite of constant public insistence into the matter, the government and all major media outlets have aggressively refused to investigate the many serious claims surrounding this case, and have tried to relegate to the realm of irrelevance those who persist in asking tough questions about it.

The common saying that “Jeffrey Epstein didn’t kill himself” is not a meme. It is a serious statement about the circumstances surrounding what has been reported as his death because, due to the speed in which his body was taken away, the official statements made about his death without presenting any serious proof to show such happened, it is neither a conspiratorial or outlandish thought to ask not only if he killed himself or was murdered, but if Epstein is even dead at all but was merely claimed to be deceased in order to ‘end’ the investigation.

As such, I have to ask another question- when does Ghislaine get COVID-19?

I ask this not attempting to declare anything, or even saying that it will happen. Rather, I am asking because Ghislaine is the female version of Epstein both for what she did as well as for what she knows. Indeed, whether or not Epstein actually killed himself, if somebody killed him and claimed it was all a suicide, or whether he was tarried off to a foreign country under a new identity and suicide was given as a way to excuse the action taken does not matter because it is not at this point about what actually happened to him, but what may happen to Ghislaine.

What could a more perfect situation be if while in prison- and it is known that COVID-19 is spreading quickly in prisons and is killing people -if a report surfaced that Ghislaine suddenly contracted COVID-19? It doesn’t really matter if she has the disease or not, nor does it speak to the real statistics about the disease, because just like with Epstein, it doesn’t really matter how he died or “died”, but just that the excuse of COVID-19 would be a very timely and opportune means of either disposing or “disposing” of her.

Do I have proof of this? Nope. What I am saying is that, as her case is a major thing to watch in the coming weeks, it would be very interesting if suddenly she was found to be “infected” and then, all too coincidentally, died or “died” and happened to take all of the secrets she knew about some of the most wealthy and powerful people in the world to the grave with her.

Why Would Anybody Buy Old Food When They Can Buy New Food?
Supreme Court Has Two More Major Cases Coming Up On Religious Liberty
Follow