You are here: Home › Financial Institutions Push ‘Cashless Transactions’ Amid Spread Of COVID-19 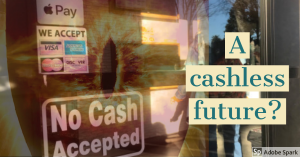 With the spread of the COVID-19 coronavirus and amid many political and social changes, DNYUZ reports that financial institutions are ‘changing’ to encourage more cashless transactions, emphasizing that at some point, the common form of currency may become another relic of the past.

But in the era of the coronavirus, cash is no longer à la mode at La Fromagerie, as social distancing requirements and concerns over hygiene prompt nearly everyone who walks through his door to pay with plastic.

“People are using cards and contactless payments because they don’t want to have to touch anything,” said Mr. Cornu, as a line of mask-wearing shoppers stood three feet apart before approaching the register and swiping contactless cards over a reader.

While cash is still accepted, even older shoppers — his toughest clientele when it comes to adopting digital habits — are voluntarily making the switch.

Cash was already being edged out in many countries as urban consumers paid increasingly with apps and cards for even the smallest purchases. But the coronavirus is accelerating a shift toward a cashless future, raising new calculations for merchants and enriching the digital payments industry.

Fears over transmission of the disease have compelled consumers to rethink how they shop and pay. Retailers and restaurants are favoring clicks over cash to reduce exposure for employees. China’s central bank sterilized bank notes in regions affected by the virus. And governments from India to Kenya to Sweden, as well as the United Nations, are promoting cashless payments in the name of public health.

Cash is certainly not dead. Before the pandemic, bills and coins were used for 80 percent of the transactions in Europe, and there are few signs that the pandemic is about to wipe it out.

Yet for a growing number of people sensitized by Covid-19 quarantines, cash is a fading routine.

“We’re living through an amazing global social experiment that is forcing governments, businesses and consumers to rethink their operating models and norms for social interactions,” said Morten Jorgensen, director of RBR, based in London, a consulting firm specializing in banking technology, cards and payments.

“We have a world in which there is less contact,” he said. “People’s habits are changing as we speak.”

Those dynamics are creating a golden moment for credit card companies, banks and digital platforms, which are capitalizing on the crisis to advance the cashless revolution by encouraging consumers and retailers to use cards and smartphone apps that yield lucrative fees. In Britain alone, retailers paid 1.3 billion pounds (about $1.7 billion) in third-party fees in 2018, up £70 million from the year before, according to the British Retail Consortium. (source)

A few days ago, I went to a hardware store to pick up some replacement parts for a tool. While I was there, two things struck me. First, was that the shelves, while stocked, were very sparse if one looked carefully. Second, was that there were signs saying to please use a card since cash was in short supply and could not necessarily be used to make change.

Now it is true that germs spread by cash- this is a known fact. However, as the story above notes, one cannot help but wonder if something else is taking place.

There has been a “war on cash” for a long time, especially in the US, where cards have been promoted aggressively. The reasons for this are numerous, but cash always has been “king” because cash, for all of the criticisms that one can say about it, is a physical connection to a purchase that also cannot be forever monitored like a card, and cash also does not incur fees by its mere use (cards charge merchants a fee for each use).

Many people have speculations as to what such a system could look like or its effects. However, what one can say is that regardless of possibilities, the reduction in cash correlates directly with monitoring and fee-exploitation by way of major banks and financial institutions. Ultimately it is not about public health or safety, but about consolidating power using in this case, COVID-19 as an excuse by exploiting the real germ-carrying potential of cash for a greater political objective.

One may not see cash ‘disappear’, at least for a long time. After all, it is ‘legal tender for all debts, public and private’, as it says on the money itself. However, what may happen is that one finds it is ‘not preferred’ and that using it causes delays and other problems that one can fight through, but with difficulty, and will be used to funnel the masses into the non-cash options.

What Black Nationalists Are Doing In American Society Is Absolutely Evil
While The World Burns And Scandals Are About, White House Prepares To Anger Millions Of Teens With Threats To Ban TikTok
Follow