You are here: Home › While The World Burns And Scandals Are About, White House Prepares To Anger Millions Of Teens With Threats To Ban TikTok 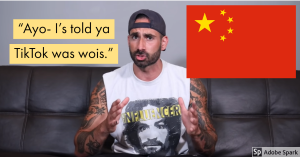 TikTok is a popular Chinese-made app that allows people to make short videos. One may think of it as a more impulsive version of YouTube (which says a lot in itself). Now there are threats from the White House as reported by Zero Hedge from multiple sources that the app may be banned because of “spying from the Chinese”.

WaPo noted that Pompeo’s interview, and his comments on TikTok, followed the TikTok teens sabotage campaign. But this is hardly the first time the secretary of state has warned about the dangers of using the app. At this point, we wouldn’t be surprised to learn that the White House sees this as a bunch of gullible American teenagers being manipulated like a gang of ‘useful idiots’ by the CCP.

Notably, Kellyanne Conway’s teenage daughter is now using the app to thoroughly embarrass the bejeezus out of her mother by airing the family dirty laundry in public.

India recently banned TikTok and dozens of other Chinese apps, and Ingraham was simply asking if the Trump Administration, which has been ratcheting up the pressure on China, might consider pursuing a similar tack.

“We’re certainly looking at it,” Pompeo said, adding that the administration was taking the issue “very seriously.” “With the respect to Chinese apps on people’s cellphones, I can assure you the United States will get this one right.”

But he added: “I don’t want to get out in front of the president, but it’s something we’re looking at.”

Asked if he could endorse Americans downloading the app to their phones, Pompeo replied: “Only if you want your data in the hands of the Chinese Communist Party.” (source)

The way this is presented makes it sound like Dom Mazzetti of BroScienceLife (a character creation of Michael Tornabene) is right when he says that “Tiktok is worse than Coronavirus”.

But seriously, it is obvious that the Chinese are spying- as are the Americans, Russians, Germans, British, French, Italians, Turks, Japanese, and Indians. All of the nations are doing it, and that China has been taking data from TikTok and storing it is not new. Indeed, if one believes this, one may actually believe in those meaningless disclaimers of “your data is safe with us” and “we do not sell your data” while Facebook, Google, and all other companies are competing to sell it as fast as possible and when caught say “mistakes were made”, fire some low-level and irrelevant employee, pay a small fine, and continue on as normal.

This is nothing new. This has been going on for years. The US does not care about the spying, as arguably she is the most notorious at spying of all the nations. What matter is that, like COVID-19 and calling it “China Virus”, like the corn-and-soy wars I have discussed, and like the original reason why the US opened free trade with China and got into debt that she never intended to pay back and planned on disowning later, she is at war with China and is preparing for a hot war against her. The charges of “spying”, while true, are but political propaganda meant to incite people, and as with many things, TikTok here is being used as the chosen “target” to “attack” in the name of attempting to assert political relevancy.

If Trump really wanted to help the country, he would deal with the patterns of spying, lobbying, and corruption from certain specific other nations, especially as it regards currency fraud, banking scandals, the illegal possession and traffick of nuclear weapons, as well as a host of other crimes against many other peoples that are either ignored or selectively forgotten for political expedience from cabals of tribalistic lobbyists working together for their benefit.

But instead, we are being told that a bunch of under-age teenagers shaking their backsides in skimpy clothing to get attention from random strangers on the Internet is the true threat to national security.

In other words, it is just politics as usual.