You are here: Home › Greeks And Russians Voice Protests As Sultan Aspirant Erdogan Moves To Turn Hagia Sophia Back Into A Mosque 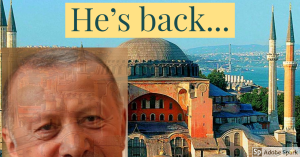 The place where the Hagia Sophia is located has been used as a church since 360, but after the construction of the particular church in 537, for over 900 years it was used as a church until the Ottoman conquest of Constantinople in 1453, at which point it was turned and used as a mosque until the overthrow of the Ottoman Empire and the establishment of the modern Turkish republic, in which it was turned into a museum in 1935. However, with President Erdogan aspiring to the classical ideals and possibly title of “Sultan” and his push for the Islamization of Turkish society, he is pushing to have to museum and church transformed back into a mosque, which Zero Hedge reports from the Greek Times and the Russian TASS that both Greece and Russia are voicing major protests.

Greece and Turkey are once again at odds over the fate of one of Christendom’s largest and oldest churches, built under Byzantine Emperor Justinian in the 6th century, and surviving changing empires throughout history.

The Church of Hagia Sophia in Istanbul was – prior to the Turkish takeover of Byzantium in 1453 – Constantinople’s most famous church and center of the Orthodox Christian world. Under the modern Turkish state it’s gone from mosque to museum to ‘protected’ UNESCO world heritage site, despite still being considered by Greece and Greek visitors, as well as Russian pilgrims, a church.

But now Turkish President Recep Tayyip Erdogan and lawmakers are eyeing changing its status back to a mosque, which has outraged Athens. Russia has also chimed in, with both the Kremlin and Russian Orthodox Patriarch Kirill condemning any potential move to turn Hagia Sophia into a mosque.

“We by all means hope that Hagia Sophia’s status as a world heritage site will be taken into consideration,” a Kremlin spokesman said Monday.

“Of course, this is a world masterpiece beloved by tourists coming to Turkey from all over the world and especially by tourists from Russia who not only recognize Hagia Sophia’s tourist value but also it’s sacred spiritual value,” he added.

Turkey’s top court is said to still be debating the move. There are still multiple tens of thousands of indigenous Christians in Istanbul and in parts of Anatolia, mostly Greek, Syriac, and and some few remnant Armenian Christians. These ancient communities say Erdogan has newly unleashed a war on Turkey’s Christians.

The Russian Orthodox Church slammed the potential Turkish move as “unacceptable” and a “violation of religious freedom”. The statement said: “We can’t go back to the Middle Ages now” — referencing centuries where Ottoman policy severely suppressed Christians throughout Asia Minor.

The controversy has unleashed a storm on social media, which has included those against turning Hagia Sophia into a mosque envisioning it as a church once again: (source)

The question truly is, will this actually mean anything, and the answer is likely no.

Greece is not even a paper tiger, because she is so disorganized she does not know where her papers are, even her bank papers. She has a lot of history but is broke, impoverished, and just weak, a far shadow from the ancient ideals of “Sparta” that so many people, especially in right-leaning political circles, fantasize about from movies. Turkey is the eighth most powerful military in the world and the second largest in Europe. Indeed, Greece is but feed corn for the Turkish military juggernaut that will not be easily stopped.

Russia is lauded by many as a sort of “Christian savior”, but the “Christian” whose leader and state-sanctioned Church have such a fawning adoration for the atheist mass-murderer Stalin is about as pious or Christian as it would be for the Catholic Church to honor Garibaldi, Mazzini, or Mussolini. Besides, Christianity is largely associated with political affiliations in Russia as opposed to actual belief, and those who believe are mostly old and dying, since most people do not believe in anything and for those people who do have a religion and seriously practice it, Islam is not just the major religion, but it is the Muslim regions (such as Tartarstan) that often constitute what little “middle class” there is that exists in Russia. Putin knows that the Muslim population is growing while the Christian population is declining, and in spite of his language, he works very hard to win and keep the support of the Russian Muslims, many who are of Turkic stock and naturally have sympathies for ethnic, historical, and cultural reasons with their Ottoman kinsmen or co-religionists.

It will be interesting to see if Greece or Turkey do anything other than to register protests. However, from the way it seems and knowing history, plus the fact that Turkey is a main ally of Germany and Russia needs German support if she going to be able to successfully keep American influence against her, and possibly a loss to the US from taking place, it is likely this will be like many political statements, which are a bunch of words and photo opportunities to be forgotten later.

While The World Burns And Scandals Are About, White House Prepares To Anger Millions Of Teens With Threats To Ban TikTok
In 2016 It Was “Build The Wall”, Now It’s ‘Save The Statues’
Follow