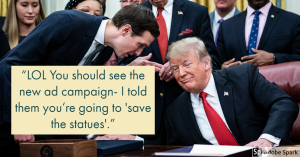 In 2016, President Trump boldly proclaimed among many things that he would “Build the wall” to finally resolve the migration and border issues that have been such a serious political issue for so many. Instead, and regardless of what one holds about the matter, the fact is that Trump did nothing about the situation, as with most of his promises. This was the real scandal- instead of giving a “yes” or “no” answer, he refused to answer, tried to say other people were the problem, and then run away from the issue.

This persistent pattern of failure is what has made so many people despise Trump, especially from his own base. Now in 2020, not only have both campaigns considerably lacked energy (indeed there is more energy in a shuffleboard tournament in a retired persons’ home than in the current election), but instead of “build the wall” (a powerful, evocative phrase), Trump’s campaign is promising to ‘save the statues’ with pictures of the statue of Christ the Redeemer in Brazil as the Daily Beast reports.

President Donald Trump’s determination to preserve iconic statues and monuments is so profound and all consuming that he’s apparently extending his policy abroad.

In a round of new digital ads, the Trump re-elect asks people to support the president as he stands up to the angry mobs trying to tear down iconic memorials. In one specific ad, the endangered statue that the campaign spotlights happens to be the famous Christ the Redeemer statue in Rio de Janeiro, Brazil.

“The President wants to know who stood with him against the Radical Left,” declared dozens of ads run over the weekend on pages for Trump and Vice President Mike Pence. The ads featured a graphic with an image of the Christ the Redeemer statue above the text, “WE WILL PROTECT THIS.” The photo appears to have come from an online database of free stock images.

The ads, which ran on Facebook and Instagram, come as the Trump campaign is increasingly focused on the destruction and removal of historic monuments and statues by protesters around the country—many of them relics of the Jim Crow era but others tied to colonial America and even some honoring abolitionist and civil-rights icons. Trump focused significant attention on the matter during a speech at Mount Rushmore over the Fourth of July weekend.

Unlike the statues Trump and his team have focused on to date, though, Christ the Redeemer is not in the United States. There’s no indication that the 125-foot sculpture, which sits at the peak of Corcovado mountain overlooking Rio, is at risk of vandalism or removal. It’s also not clear how Trump or Pence might go about protecting it if it were threatened, which, again, it does not appear to be.

There have been demonstrations against other famous likenesses of Jesus Christ around the world; in India, Hindu nationalists recently protested plans for a new statue that could rival Christ the Redeemer in size. But the Brazilian statue doesn’t appear to have been targeted. Indeed, it’s been used instead to promote messages of unity and perseverance as Brazil reels from a huge outbreak of coronavirus in the country.

Trump has vowed to protect statues of Jesus Christ in the United States, and has railed against calls from some progressives, notably a one-time spokesperson for Sen. Bernie Sanders’ (I-VT) presidential campaign, to remove or replace Christian imagery.

It was not immediately clear whether the Trump campaign was aware that the image it chose for its Facebook ads over the weekend showed a statue in another country.

According to Facebook political ad data, the Trump Make America Great Again Committee, a joint fundraising account for the Trump campaign and the Republican National Committee, paid between $14,000 and $22,000 to promote 67 versions of the ad on Facebook and Instagram. The ads, which began running on Friday and are now inactive, were viewed between 930,000 and 1.1 million times, according to Facebook data. (source)

Nobody should actually believe that Trump is going to do anything. If he refused to fulfill basic campaign promises before, it is doubtful he will do this for anything in the future.

What is his plan? Indeed, Trump does not have a plan. He does not have anything. Rather, this is a shameless ploy for votes from the Boomer bloc, since Boomers are the only remaining generation of Americans with any serious interest at all in Christianity. Millennials certainly do not care about religion much, Zoomers even less, and the Alphas, who cannot vote but are growing up now, are the absolute most atheistic, heathen, and godless generation of Americans yet to exist. Given the trends developing, it would not be a surprise if all three, but in particular the youngest upon reaching maturity, would also pull down churches and statues out of a hatred of religion and God because they have nothing.

The current 2020 election is as ridiculous as the course of events has been. At this point, one might as well (noting the words of Justice Clarence Thomas) give electoral votes to Frodo Baggins, and likewise nominate the cartoon character Cotton Hill, father of Hank Hill from the “King of the Hill” TV series, for President.

At least Cotton Hill would be funny to watch, and he would probably do what he promised.

Greeks And Russians Voice Protests As Sultan Aspirant Erdogan Moves To Turn Hagia Sophia Back Into A Mosque
If The People Destroying Statues Really Cared About Fighting Racism, Then Why Haven’t They Called For The Removal Of The Statue Of Charles Darwin?
Follow