You are here: Home › Half Of The US Is Cooking Amid A Heat Wave 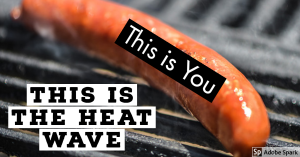 The weather is always hot in the summer, but this summer is particularly hot, for not only are there many interesting, strange, or just crazy events taking place, but according to Accuweather, half of the country is under a heat wave with soaring temperatures cooking the population, setting records and straining power grids that run on air conditioning.

Residents from the California valleys to the Mississippi River are bracing for temperatures near- to well-above 100 degrees Fahrenheit expected to last into mid-July.

Brutal heat has been baking the southwestern U.S. since early last week. Phoenix, Arizona, has experienced high temperatures of 110 degrees or more since July 4, and cities like Las Vegas and Bakersfield, California, soared above 100 degrees for several days.

Excessive heat warnings were put into place until Monday evening, from Southern California to southeast Arizona. Heat advisories on Saturday extended even farther east, from southern New Mexico to the Florida Gulf Coast.

A northward bend in the jet stream will continue to help keep the heat locked over the Southwest and also allow it to nudge eastward into the south-central U.S. through the middle of the week.

High pressure settling under this jet stream will limit showers and thunderstorms, leaving communities to bake in the unobstructed sunshine.

On Sunday, Las Vegas recorded its highest temperature of the year thus far when the city soared to 113 degrees. However, Las Vegas fell just 1 degree short of tying the record high for the day, last set in 2003.

The mercury in Phoenix, Arizona, climbed to 116 degrees on Sunday and broke the record of 115 last set in 2009. As if record-breaking daytime high temperatures weren’t enough, abnormally warm low temperatures are not offering any relief. The mercury has not fallen below 90 degrees since July 7 in Phoenix.

Even Palm Springs, California, got in on the record-breaking action on Sunday. Palm Springs soared to a sweltering 121 degrees on Sunday and broke the previous record of 120, last set 35 years ago.

None of those locations came close to Death Valley National Park in California, however. The mercury topped out at 128 F on Sunday shortly after 5 p.m. local time, and in fact, it never dropped below 100 as the low for the day was 100 F.

Temperatures will continue to soar as much as 10 to 15 degrees above normal across parts of Nevada, Utah, Arizona, Colorado and New Mexico into Tuesday.

Daily record highs will continue to be challenged, but temperatures could even come to within a few degrees of all-time record highs set as far back as 1930. (source)

Hot weather is no fun when it becomes something intolerable.

Now in light of this, one may think about how the US has been supporting all things sodom and advancing its cause all over the nation and world. There is no place that one can escape from it.

I am not saying that the heat wave and sodom are related here. What I am saying is that if one thinks about this heat wave and how intolerable it is, one may want to think about the punishments for sin, especially those that cry out to Heaven for the vengeance of God, and especially the one of sodom that brought down the wrath of God on the cities of the plain thousands of years ago as a sign for all time as to the evil nature of the act.

The ovens used for pizza get up to about five hundred degrees. That is a terribly high temperature, and one would die in those ovens. If a man did survive, he would be mutilated permanently.

Imagine a pizza oven that one cannot escape from with no relief. That is just a tiny taste of what hell is like.

It is a terrifying think to think about, considering how hard the heat wave is right now, that is completely tolerable to survive in.

Stay cool, but let the heat wave be a reminder that there is a place that is much hotter than any heatwave or oven.

Florida Sets Latest COVID-19 Case Infection Record
Germany Wants Europe To Be Independent Of American Tech Giants. This Is Yet Another Sign Of The Gradual Breakdown Of The Global Order
Follow