You are here: Home › Germany Wants Europe To Be Independent Of American Tech Giants. This Is Yet Another Sign Of The Gradual Breakdown Of The Global Order 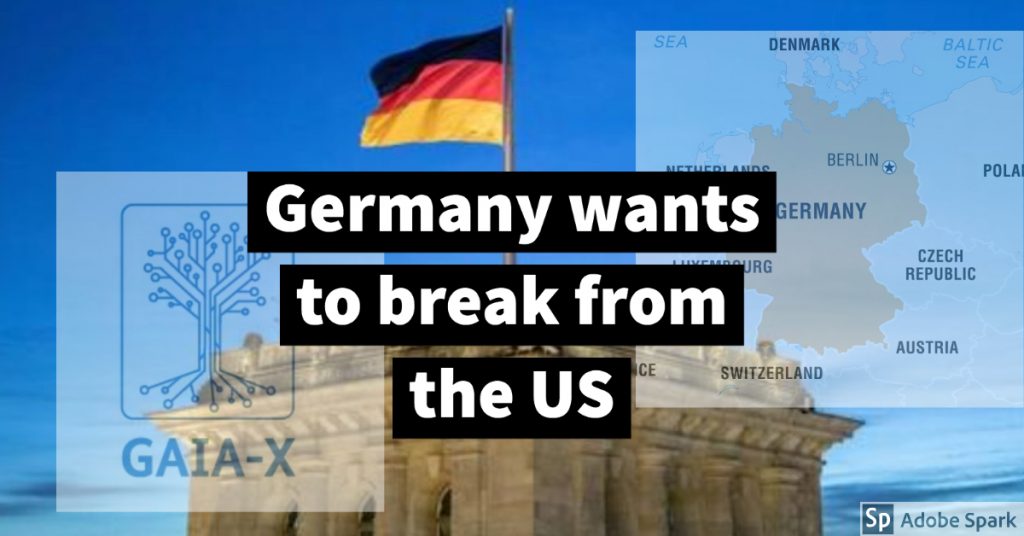 Germany and France are cooperating in the creation of a new cloud computing ecosystem in order to life Europe’s dependence on major American Silicon Valley powerhouses like Microsoft, Amazon and Google. This new system is being called Gaia-X, named after the mother earth goddess of ancient Greece. The reasons for Gaia-X — which are being presented to us — is to reduce the EU’s dependence on US’ technology and to also prevent the US from spying on EU citizens through this new Euro cloud. According to a report from South EU Summit, Gaia-X “storing and processing data on servers stored locally and in compliance with the EU’s strict laws on data privacy.”

Behind the creation of Gaia-X are 22 German and French corporations, such as Bosch, Amadeus, BMW, Deutsche Telekom, OVHcloud and Siemens. “Building a European-based alternative is possible only if we play collectively,” said Michel Paulin, CEO of independent French cloud service provider OVHcloud. French Economy Minister Bruno Le Maire said: “We are not China, we are not the United States, we are European countries with our own values and with our own economic interest that we want to defend.” Le Maire’s words denote something that is both very real and very symptomatic of a worrying reality: the disintegration of the globalized world as we’ve known it, and the transition towards tribalism. From “We are Europeans” its going to be “We are Germans,” “We are French,” “We are English,” etc.

One thing that has helped accelerate the creation of Gaia-X is the Covid crises. As Le Maire explains:

“With the COVID crisis, companies massively shifted to teleworking. This makes the need for (a) secure and European cloud solution all the more urgent… The crisis also showed that the giant tech companies are the winners…the European digital space has to be protected.”

Germany and France hope that Gaia-X will be launched by 2021. The efforts of Germany and France to reduce independence on American technology is happening in an atmosphere of growing animosity towards big American tech giants like Amazon. In March of 2020, I did a video predicting an intensification of hatred towards Amazon for its lack of concern for safety for workers in France during the Covid pandemic:

According to South EU Summit in regards to Gaia-X and the EU’s tensions with American tech:

This isn’t the first time Europe has tangled with American tech giants. In 2019 and now in 2020, France has butted heads with American corporations earning profits in Europe to pay their fair share in taxes, and recently fought Amazon to a standstill over working conditions in their French warehouses.

Moreover, there is the issue of of American spying the EU. For example, in 2015 the EU expressed distrust for the Americans due to American encroachment on Europeans’ online information. As we read from a 2015 article from the Intercept:

The European Union no longer considers the United States a “safe harbor” for data because the National Security Agency surveillance exposed by whistleblower Edward Snowden “enables interference, by United States public authorities, with the fundamental rights of persons.”

The EU’s highest court, the Court of Justice, declared on Tuesday that an international commercial data-sharing agreement allowing U.S. companies free-flowing access to large amounts of European citizens’ data was no longer valid.

Overall, what the formation of Gaia-X indicates is a breakdown of the globalized establishment that we have been so used to. And make no mistake, when they talk about “France and Germany” doing this, it is really Germany with France as its subordinate. There is a great example that demonstrates the reality of German domination over France. In June of 2015, Emmanuel Macron, when he was the economic minister of France, sent a text to Greece’s finance minister, Yanis Varoufakis, when Greece was in the midst of its terrible economic crisis, saying: “I do not want my generation to be the one responsible for Greece exiting Europe”. Macron agreed to get President Hollande to help Greece. He later wrote a text to Yanis stating that Hollande was planning to announce the reopening of negotiations. Macron agreed to come to Greece to help put together a deal. But, on June 29th, the day that Macron was suppose to arrive to Greece, Alexis Tsipras, the Prime Minister of Greece, called Yanis confused: “What’s going on? Hollande’s office replied that they have no idea about a possible mission by Macron to Athens.” Yanis asked Macron about what was happening, and the answer he got back was shocking: “The people around Hollande do not want me to come to Athens. They are closer to the Berlin Chancellory than to our government.” (See Varoufakis, Adults in the Room, ch. 16, pp. 453-454). When we speak of the EU, we are speaking of a Europe controlled by Germany.

What we are currently witnessing is the gradual breakdown of the global order, and the transition towards global tribalism.