You are here: Home › Largest Grocery Store Chain In The US Bans Cash Due To COVID-19 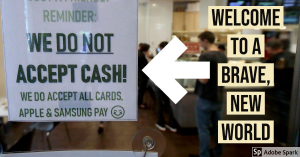 A lot of people have expressed concern that cash may be banned using COVID-19 as an excuse. It is interesting that this observations follows at the tail major retailers, such as the second largest or largest (depending if one counts Wal-Mart as a grocer or not) in the US of the Kroger corporation and her subsidiaries, have been reported by News Channel 5 Nashville for banning cash as a form of payment due to the virus.

ue to a coin shortage at the Federal Reserve, Kroger will no longer return coin change to customers. Instead, the remainders from cash transactions can either be donated to charity or applied to the customers’ loyalty cards to be used on the next purchase.

Kroger officials said, “at Kroger, we are implementing several creative solutions to minimize the impact to our customers…We know this is an inconvenience for our customers and we appreciate their patience. The Treasury Department expects the shortage to diminish as more regions of the country reopen.” (source)

Cash still remains “legal tender”, but one cannot help but ask if a trend is starting to form. Cards have been pushed for a long time, but with the virus, for real or perceived reasons, it is being attacked by making it harder to use, or that is what appears to be happening.

A lot of America runs on economic “smoothness”, and people are very impatient. By making it harder to use cash, in has the direct result of causing problems to the “flow” of business, so while it does not directly ban the means, it just makes is a lot less accepted. It is sort of like to apply for a passport or other government document using papers other than a just a drivers license, birth certificate, and social security card- it is legal, but makes people look suspiciously at you, takes a lot more time, and makes people not want to help you.

The end of cash- or at least a significant reduction in the use of it- means the end of privacy because cash cannot be traced like a card down to exact details that can be commoditized, categorized, and weaponized against the person who made the purchase.

This trend has been going on at many major retailers. It also is a huge blow to small businesses, as they often rely on cash and some form of “off the books” income to stay afloat, unlike major corporations, who between a combination of government-backed loans, subsidies, and taxpayer-funded handouts are able to barely earn a profit.

It will be interesting to watch the future of the use of cash as well as the economic fallout from it.

Small Businesses Are Being Destroyed By The Economic Effects Of COVID-19
Gunmen Attack Church, Ambush Four People And Burn Them Alive
Follow