You are here: Home › Small Businesses Are Being Destroyed By The Economic Effects Of COVID-19 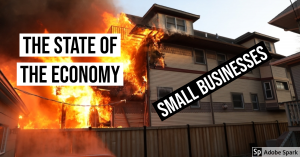 AP News reports, in a story that is not a surprise at all, that small businesses are being destroyed by COVID-19.

As economies around the world reopen, legions of small businesses that help define and sustain neighborhoods are struggling. The stakes for their survival are high: The U.N. estimates that businesses with fewer than 250 workers account for two-thirds of employment worldwide.

Small businesses around the world are fighting for survival amid the economic fallout from the coronavirus pandemic. Whether they make it will affect not just local economies but the fabric of communities. Associated Press journalists tell their stories in the series “Small Business Struggles.” (source)

This is a not a surprise at all. I am surprised that it has not happened sooner.

I have said it before and will say it again- it is not one cause, but like a Hollywood celebrity who dies from taking not one, but a cocktail of drugs and things not intened for human consumption, the US economy has overdosed on a toxic combination of debt, deferments, cheap loans, money printing, social laziness, indulgence, a lack of a balanced economy (complete inversion of the relationship between the agricultura-industrial-service tiers), and many uncontrolled political problems that are forcing the problems to be exposed and unravel.

Pandemics happen throughout history, so COVID-19 is not unique in that way. All that the disease really serves is to be a tiny spark inside of a large room tightly filled with open fireworks, gasoline spilled on the floor, and propane gas leaking with no way to vent the gas fumes resulting in them all being concentrated. One spark sets the entire shed ablaze into a fireball, but it is not the fault of the spark, since the conditions were so established and nothing was done to mitigate them.

Big businesses and small businesses can be compared to countries. Big countries like the US, while they suffer, will suffer less than small countries because the size, even with the amount of debt and problems, acts also as a shield against the wave of defaults and chaos. The smaller ones suffer because while they have far less, they are more exposed and by that they are tied to the system and cannot be detached from it in such a case without often suffering extreme violence.

The same goes for business. Large corporations will suffer, but many will survive because of the size and market presence. the small businesses to the contrary, since they are exposed and depend on the expenditure of excess capital that would have went to a larger store in order to sustain themselves, will be just wiped out mercilessly. Some will survive- make no mistake about this -but they will be the minority.

This is not abnormal, but part of the sustained consequences as a result of the ongoing economic collapse that was prepared for years to happen but so many refused to acknowledge until the issue was forced and it has now become too late to have anything except a painful detachment from the situation.

If you have a small business, one would be wise to consider making provisions now for how to address the future, since surviving through the crisis, that will probably last a decade or more, is going to be a major issue.

This is also not merely an “American” issue. It is happening, as the whole AP story notes, all around the world because of the interconnected nature of the global economy. There is no escaping it, and all people, from the richest to the poorest, are going to be affected by it, and in a major way.

This is unprecedented in human history in terms of scale and intensity, and since economic problems often lead to political problems, the trend that is likely going to develop for the next decade will be intensifying political crises until it boils over, just like the global economic problems, into a global war.