You are here: Home › Every Son And Daugther Of The Irish- In America And Ireland -Needs Reparations 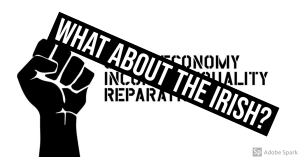 Asheville is to North Carolina what San Francisco is to California, Austin is to Texas, or Provincetown is to Massachusetts- it is a very liberal and generally ‘strange’ place with a lot of strange or extreme idea of the far-left variety. according to an article from the Asheville Citizen Times, the city council has recently voted on giving reparations to the American descendants of African slaves because of slavery.

In an extraordinary move, the City Council has apologized for the city’s historic role in slavery, discrimination and denial of basic liberties to Black residents and voted to provide reparations to them and their descendants.

“Hundreds of years of black blood spilled that basically fills the cup we drink from today,” said Councilman Keith Young, one of two African American members of the body and the measure’s chief proponent.

“It is simply not enough to remove statues. Black people in this country are dealing with issues that are systemic in nature,” Young said.

The unanimously passed resolution does not mandate direct payments. Instead it will make investments in areas where Black residents face disparities.

“The resulting budgetary and programmatic priorities may include but not be limited to increasing minority home ownership and access to other affordable housing, increasing minority business ownership and career opportunities, strategies to grow equity and generational wealth, closing the gaps in health care, education, employment and pay, neighborhood safety and fairness within criminal justice,” the resolution reads.

The resolution calls on the city to create the Community Reparations Commission, inviting community groups and other local governments to join. It will be the commission’s job to make concrete recommendations for programs and resources to be used.

Councilwoman Sheneika Smith, who is Black, said the council had gotten emails from those “asking, ‘Why should we pay for what happened during slavery?'”

“(Slavery) is this institution that serves as the starting point for the building of the strong economic floor for white America, while attempting to keep Blacks subordinate forever to its progress,” said Smith.

Councilman Vijay Kapoor who has often split with Young and Smith on police and budget issues said he supported the measure for moral reasons. But he said skeptics could look to the “practical reason”: data showing showing large disparities between African Americans and other Asheville residents.

“We don’t want to be held back by these gaps,” Kapoor said. “We want everyone to be successful.” (source)

This of course comes as none of such persons has ever experienced slavery, and one would think that with the countless and continual handouts given to the same aforementioned bloc in the form of various types of welfare, full-paid scholarship, job preference in hiring, and even reduced standards for acceptance on the basis of race as opposed to other people (aside from the fact that such is arguably a form of racism), there are far too many who seem to claim that because of the, to paraphrase the words of numerous activists, “the ongoing legacy of slavery”, that even more government handouts, either as a financial payment or race-based preference in more social services, are something to ask for.

To that, I should note that in the American context, if one is going to follow this same logic, there is another group who is in need of reparations, and they are the Irish and descendants of the Irish. It does not matter whether one is a “full-blooded Irishman” or had an Irish great-grandparent somewhere in the family tree- if one is Irish, one should get reparations from the American and British governments for the ongoing legacy of Anglo-American oppression, slavery, and racism against the Irish people and nation.

Anti-Irish sentiment, as Wikipedia notes, was around going back to the time of the Greek geographer Strabo. In the 19th century, it reached a fevered pitch with the Potato famine and the eugenic policies encouraged by men such as the English Protestant Charles Trevelyan, who preferred to see the Irish starve as a means to place the ‘fear of God’ into them. Millions of Irish died or fled, and when they came to England or America, suffered terribly with discrimination in work and society, including frequent persecution such as with the infamous Philadelphia riots of 1844 where many Catholics were killed. Plus there is also the issue of centuries of enslavement of the Irish, which many people do not wish to talk about.

Based on almost two-thousand years of oppression, racism, discrimination, and slavery, and in recent times especially from the UK and US, do the Irish NOT deserve not only a formal apology, but reparations to all descendants of Ireland for the crimes committed against them?

Now I want to make clear, I am NOT advocating for reparations for anybody. Indeed, all people at some point have ancestors that were both slavers and enslaved. This is a fact of human history that none can avoid. It is true that in cases of recent crimes, financial restitution can be a means for applying justice in a way that is practical and puts a matter to rest, which should be the point of any justice system, not to create a situation where perpetual grievances can be launched at people for things they did not do, for such is not justice, but vengeance and power-seeking in the name of justice at the expense of another.

It is not the fault of the modern descendant of the English people for crimes his ancestors committed against people in Ireland in as much as it is not the fault of people in America today whose ancestors owned slaves that they are individually or collectively responsible for the current situation of many descendants of the African slaves. Indeed, it is arguable that in the case of African slaves- since that is what the main issue of “reparations” focuses on in the US -the British and the Americans have done exceedingly well to provide them with many, many chances to better themselves, and far more than what were extended to the Irish when they came to the US and certainly for other ethnic groups in Europe such as the Polish, who still have yet to receive even so much as an apology for centuries of being plundered, butchered, and enslaved by the Germans, Russians, Austrians, and even Turks.

There was a time when private slavery was legal in the US. Indeed, people serious about stopping slavery would be better focused on ending government-ownership of slavery under the justification of crimes committed (contrary to popular opinion, slavery was not banned- read the Thirteenth Amendment) instead of trying to blame “white people”- many of whose ancestors in the last two-hundred years not only never owned slaves, but were actively slaves themselves.

History is not perfect. Bad things happen, but one’s future does not need to be shaped by one’s past, especially for events which one has no relation to or experience in. The only thing that even just the talk of “reparations” will do is to encourage racism on both sides and sow conflict between the groups, which is something that helps no one.

It is important to talk about things that happened, but it is also important sometimes as a part of forgiveness to stop talking about certain things because there is a point when “conversation” no longer serves a constructive purpose. Indeed, one should remember the past but not live in a mindset based on the past because while one should draw upon the lessons learned, rooting one’s identity in old conflicts does not resolve them but perpetuates the conflict to a point where it can start again.