You are here: Home › BLM, White Supremacists, And A Troll Between Them: A Case Study In The Strategy Of Tension 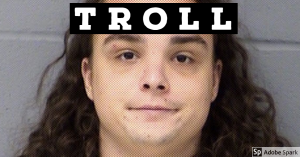 It is rare to find a very clear case of explicit behavior illustrating the dichotomy between the false left-right paradigm and how it is used as a strategy of tension because those who put together such operations invest considerable amounts of time and resources into making sure as best as possible that the general public remains unaware as to what is happening, and even with a lot of detective work, one still is not always able to get a fully clear picture as to all details. Likewise, the ability to even spot such a strategy requires a lot of attention to news and the ability to cross-reference past events with current ones and to understand how future outcomes would be affected. Thus when an example is found of such a nature, matching all the aforementioned criteria, it is an excellent example for a case study.

Fortunately, we at Shoebat.com have just discovered one to share with you.

In February 2020, I wrote an article entitled “Who is Keegan Godsey?”, and before continuing, I recommend you click here and read this article as it will provide the details needed to understand in its totality the current situation. To summarize, Godsey is a 23-year-old man who makes videos of himself doing outrageous public things to get attention. This February, he attracted media attention after setting up a camera outside of his apartment window of an alley filled with mostly black homeless people and had people pay him anywhere between one and five dollars to play racist music or say racist things to them. He was profiled on local news, and eventually Godsey’s Youtube channel, called “Keegle Weegle”, was shut down and according to the last available information, was evicted from his apartment. Prior to this, Godsey crashed a DJ Khaled concert, walking up on stage and joining DJ Khaled that resulted in him getting an invitation to the Jimmy Kimmel Show.

A compilation of clips from the channels when it was operating. One can note at 5:45, for example, references to 4Chan (/pol/), as Godsey seems to have been posting on 4Chan to encourage the open racists there to harass the black people in the alleyway.

But Godsey’s most interesting act, and which may land him in prison on felony charges, happened this June 2020, where he was arrested for participating the the Black Lives Matter demonstration where he actively vandalized part of the Texas State capitol as it has been reported by the Texas Department of Public Safety.

On Tuesday, June 23, the Texas Department of Public Safety (DPS) arrested a suspect in connection with the vandalism and damage caused to the Texas State Capitol during a protest on Saturday, May 30. During the incident, a number of protestors intentionally damaged the historic Texas State Capitol building, monuments and fixtures, as well as DPS patrol vehicles. Several DPS Troopers were also injured during the riot.

As a result of this investigation, DPS Special Agents obtained an arrest warrant for Keegan Dalton Godsey, 23, of Austin, Texas. Godsey was arrested without incident for felony criminal mischief, riot and interference with public duties, and was booked into the Travis Co. Jail on Tuesday. (source)

Godsey’s arrest was also reported by the AP and local news.

In February 2020, Godsey was encouraging white people- specifically by advertising his channel on 4Chan -to encourage hatred and violence against blacks.

Now three months later, in June 2020, Godsey is marching with black people and encouraging them to engage in violence against whites.

Now Godsey is white himself, and given his photos and his profile, is potentially a sodomite. Godsey does not care about white or black, he does not care how his actiosn affect other people. The only thing that he cares about is getting attention by doing outrageous things.

Keegan Godsey is the perfect definition of a troll or agent provocateur. It is not that he has principles that one does not like, but that he has no principles at all, and he changes his views and actions to whatever gets him the most attention and influence. It is arguable that he believes in nothing, feels nothing for anybody else, cares for nothing, and values nothing. Now while there could be more details, barring further ones, this is likely the most sensible explanation for why he would stand with white supremacists encouraging violence against blacks and then just as easily switch to stand with black supremacists encouraging violence against whites.

Men such as he are the reason why one must be incredibly skeptical of people who take extreme positions in any argument, for while it is true that the “radical” often gets the most attention, often times it is used just to grab power, and the same individuals can swing to the opposite position with ease or support opposite positions using their current position as a cover. Meanwhile the groups that have been placed against each other and encouraged to fight- the strategy of tension -are too busy consumed with each other to see that it is men such as Godsey who are manipulating both at the same time.

This is the reason why trolling can be a very dangerous thing, because it is a vehicle by which to destabilize an otherwise peaceful or revive a conflict that is currently at rest. Some people will say that to do such things is “freedom of speech”, but such is just an excuse to encourage revolutionary, destructive, and ultimately abusive behavior. Godsey is a very obvious example, as most trolling is far more subtle and well-planned, but his case is a lesson to all that most trolls do not act on the basis of principle, but power, and that they care about no one except themselves and realizing their objective, and will quickly “bite the hand that feeds them” if they believe it suits their interest to do so.

Trump Administration Re-Routes COVID-19 Data To Itself Before Going To The CDC
If You Believe That Parler Is An Actual “Free Speech” Alternative Social Media Platform, Not Only Are You Deceived, You Just May Find Yourself In Legal Trouble
Follow