You are here: Home › If You Believe That Parler Is An Actual “Free Speech” Alternative Social Media Platform, Not Only Are You Deceived, You Just May Find Yourself In Legal Trouble 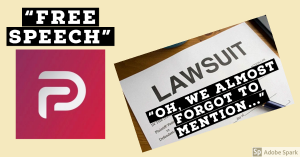 There is a lot of complaining from right-wing online media about ‘bias’ in social media, and while this is true, there are few real alternatives. However, some people believe they have found a new social media savior in the Parler platform, which Zero Hedge by way of Alt-Market reports is a ‘conservative-friendly’ free speech platform.

Most major tech conglomerates, like Google and Facebook, receive billions of dollars in state and federal government subsidies and taxpayer dollars. As far as I can tell from my research Parler does not. Twitter even received an extensive tax break for eight years worth over $70 million for being based in San Francisco as part of a program called “the Twitter tax break”. In return for giving welfare and special treatment to silicone valley, Californians in SF now enjoy a historic bubble in real estate and rental prices, along with a spike in poverty and homelessness as well endless traffic. Many of the people that work at these companies can’t even afford to live in the same city as them.

Major social media platforms that accept government funds are receiving an unfair advantage over other competing companies and should therefore be held accountable as public services, not private businesses. If a corporation like Google wants to give up taxpayer cash and pay full price for all that bandwidth it uses, then sure, they should be allowed to censor whoever they want. But until then, these companies are subject to oversight, just as any corporate monopoly would be.

The fact that Parler is encouraging political free speech is what matters here. And so far the only leftists being kicked off the site are those that deliberately go there to try to burn it down. Is it perfect? No, nothing is. But Twitter and others have a proven prejudice against conservative voices and even liberal voices that go against the accepted script. Why stay on Twitter when there are other options that are more free?

I suspect SJWs despise Parler because it represents a focal point for conservative organization, and they think they own the organizational wheelhouse.

I’m promoting Parler in this article because it’s the first major attempt I’ve seen to grow a conservative friendly social media outlet. They don’t pay me, I don’t know the people that run the company, and I don’t have any stake in Parler’s success or failure. … My hope is that the site will become an internet safe haven for conservatives during these troubled times. I feel it can be used as a tool for us to join forces and prepare. Conservative ideals and principles of limited government, civil liberties, free markets and individualism must endure for the sake of future generations. We have to start building our citadels, and Parler could be a good place to start. (source)

But is Parler really all it seems to be?

I looked into it, and I found some things that were very disturbing. Specifically, it is a matter of legal concern to anybody who thinks that Parler is an actual “alternative” that will enable “free speech” more than Twitter or Facebook, and it is regardless of what one’s political views are.

Yes, the article is from the Huffington Post, and before one says that it is just “liberal propaganda”, consider that the article makes an excellent point, which is that in Parler’s Terms of Service, the company says that if they are sued as a result of a post that one of their users makes, then it is not Parler, but the USER who agrees to pay all of Parler’s legal costs and for which the same user agrees not to sue Parler.

In fact, Parler’s user agreement and community guidelines ban several forms of speech protected under the First Amendment. And it reserves the right to “remove any content and terminate your access” to the platform “at any time and for any reason or no reason.”

Unlike Twitter or Facebook, Parler requires users to “agree to defend and indemnify Parler, as well as any of its officers, directors, employees, and agents, from and against any and all claims, actions, damages, obligations, losses, liabilities, costs or debt, and expenses (including but not limited to all attorneys fees) arising from or relating to your access to and use of the Services.”

In order to use Parler, individuals must also forfeit their right to sue Parler in court or join a class-action claim and instead must settle disputes in arbitration, a secretive process that typically favors businesses over individuals bringing complaints. (Neither Twitter nor Facebook requires arbitration in their terms of service.)

If enforced as written, the platform’s indemnity clause could be financially devastating for the average American. Although Section 230 of the federal Communications Decency Act largely protects social media companies from legal responsibility for what people say and do on their platform, the companies can still be sued and it costs money to successfully fight cases in court.

Twitter, for example, spent more than a year defending itself in a lawsuit brought by Rep. Nunes over parody Twitter accounts that made fun of him before a judge ruled that the company was protected by Section 230. (The California lawmaker has urged his followers on Twitter to “SAY NO TO SOCIALISM” and join him on Parler.)

If Nunes decided to sue Parler for letting people make fun of him on its platform, Parler would probably win in court, just like Twitter did. But under its user agreement, the company could try to force the user who mocked the congressman to pay its legal fees.

“Parler gives users a false sense of safety that they can be controversial and less moderated than other platforms, but Parler in reality passes all costs of this unfettered speech onto the speakers,” Carrie Goldberg, a New York-based lawyer with expertise in online harassment, told HuffPost.

If Parler gets sued by someone outside the U.S., in a country without a law similar to Section 230, there’s a higher risk the company would lose the case and face a costly judgment — which it could try to pass on to the user whose post prompted litigation. (source)

With Facebook and Twitter, while they are imperfect and have their problems, you as a user cannot be sued for things that you post on them. With Parler, not only are you able to be censored in the same way that Facebook and Twitter do, but you also are now legally liable and have no means of protecting yourself.

Is this a real alternative for people who care about “free speech”? Who can afford to pay possibly millions in legal costs depending upon who sues? Certainly not most people, and Parler’s actions are even more criminal than those of Facebook or Twitter, because they are now forcing individual people to risk having their lives destroyed over having an opinion.

I am not saying that Facebook and Twitter are perfect. I am saying that both platforms, while they have their problems, have set a certain standard of behavior, and while there is much that needs to be improved, Parler’s actions are deceptive and dangerously threatening the current status quo for “free speech” in social media.

New things are not necessarily better than old things, and while some things are not perfect, the alternative to them can be far worse than what one could imagine.

There is no such thing as a perfectly “free speech” platform, because in such an environment, it would permit all things, and that is to say that there are no rules, and in any state where anarchy exists, eventually it will take only one person to start saying things that are dangerous, crazy, or incendiary, and soon controversy will explode, and rules will be necessary in order to keep control before the problems overwhelm the system. This necessarily means limiting some forms of speech, and people will not agree about this, and then complain that “freedom of speech” is being “attacked”, when the reality is that the people who run the platform are trying to keep control over a lot of issues lest they lose control of the thing they created and have to face serious social or legal confrontations.

As for Parler, it seems to be the only prudent option, unless one wants to make a chance at running up a large amount of legal bills, to give a pass to Parler, for the risk is not worth the reward, and I am far less concerned about online anger and having a post banned because “SJWs are mad at conservative ideas” than I am about facing the possibility of life-crippling, unrecoverable financial ruin because somebody in another country backed by his government filed a vengeance lawsuit over a post it did not like.

On on a final note- and just out of pure speculation grounded in nothing other than personal observation -doesn’t it seem strange that Parler is being pushed to the political right in the US, with all of the criticism of the right and potential lawsuits either being lobbied at them or that could be? Does it not seem that, possibly, this may be a trap to get people on the “right” to sign up for this platform and then have their posts legally challenged and the same people bankrupted in court for spite or political vengeance?

Again, I have no proof of this, but given the craziness of the current political paradigm and the levels that some will go to in order to entrap another for the most debased reasons, truly it should be a reminder that anything is possible.

BLM, White Supremacists, And A Troll Between Them: A Case Study In The Strategy Of Tension
Christian Refugee Migration To The US Drops 90% Since 2015
Follow