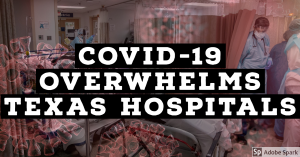 In spite of the continual emphasis by some about COVID-19 being a hoax and nonexistent, the word from health professionals dealing with the virus “on the ground” is very different, and many describe it as something to the likes which they have never seen before, and is a serious problem. In the state of Texas, as CBS News reports, the situation is so dire that hospitals are being described as “war zones”.

An eye-opening study from the Centers for Disease Control and Prevention said coronavirus cases are a lot higher than the numbers reported in some parts of the country — up to 13 times higher — because so many who were infected didn’t know it and unwittingly spread the virus. Now, we’re seeing the results of this undetected spread.

Confirmed cases in the U.S. are edging toward 4 million. The virus has killed more than 141,000 Americans. Texas recorded a thousand deaths in just 10 days. That’s as many deaths as in the prior three months.

At hospitals in the Rio Grande Valley, state health officials say 37 ICU beds are available. Hidalgo County is the epicenter.

“Unfortunately, our hospital rooms look like war zones because there are just so many from so many sick people there,” Hidalgo County Judge Richard Cortez told CBS News.

“My job is is to take care of the public health,” Cortez explained. “We brought in a lot of refrigerated trailers to access more morgues, and their capacity is 50. Well in the last eight days, we have an average of 22 people die per day.”

While cities like Dallas and Houston are now seeing a decrease in positive cases and hospitalizations, virus-related deaths in the state are up 33% over the last 10 days. (source)

There are a lot of bad things that COVID-19 is being used to justify. However, the illness is still a threat that should be taken seriously, and while it is frustrating at times to deal with, caution is indeed in order until one can be more secure about the state of the virus and its ability to infect people.

One should not “live in fear of a virus”, but in reality of what it could do and what one can do to protect onself. This means neither overreacting or underreacting, but acting property with good information, intelligence, and conviction to help protect one’s own health and that of one’s neighbors.

Masks are not a sign of “oppression”, but good social manners and attempting to seek the best for others and oneself in the middle of a global disease pandemic.

One does not want to become sick- the hospitals are already overwhelmed, and the situation is not improving.