You are here: Home › Expect To See More US Involvement In The Arctic 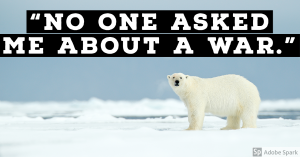 When one thinks of the North Pole, one thinks of Santa Claus, elves, and reindeer. However, the lands of “Santa’s workshop” may need to temporarily shut down and relocate as Russia has been aggressively moving into the Arctic, to a lesser extent China, and now as Reuters reports by way of Secretary of State and former CIA head Mike Pompeo in a recent interview.

The United States and allies have been too slow to react to Chinese and Russian interests in the Arctic region, U.S. Secretary of State Mike Pompeo told Danish public broadcaster DR in a recorded interview on Wednesday.

“I think we have all been a little bit naive to watch not only the Russians but the Chinese interest there continue to become more and more aggressive,” Pompeo told DR during a diplomatic visit in Copenhagen.

“We are a little late. That’s alright, I’ve been late to parties before and had a great time. We’ll succeed.” (source)

Russia right now is militarizing the Arctic for one reason: oil.

In order for Russia to win in a war, she has to keep her war machine going. The way to do this is to ensure a permanent, easily accessible supply of oil for her munitions and supply factories. She cannot rely on another for help, and given her size, her oil supplies in Siberia, while vast, are easily attacked amid her small population.

Russia has basically five major oil fields- four of those are east of the Urals, and the historically main one is in the Volga Basin betwee the Black and Caspian Seas. This was the reason why WWI and WWII were decided in that region- because Germany could not capture those areas, and so cold not keep her war machine going.

Right now, Russia is in the worst shape she has ever been in. She is losing people, she has a migrant crisis, her population and finances are lower by comparison than when she was in the same historical places last century, and she is facing another crisis in the Volga region, started by the US and Germany, arguably for the same reasons.

The reality is that, in spite of what many may say, Russia will likely lose control over the Volga in a major global conflict. This is just the reality, and she cannot afford another “Battle of Stalingrad” scenario where over a million Russian soldiers died. It would devastate her army worse than the destruction of the German Sixth Army at Stalingrad, since Russia could not recover from it.

Rather, Russia is making the smartest move she can- to pull north into the cold, which she historically uses as a “shield” when in an conflict against her enemies, and to try to extract Arctic oil.

This is what Pompeo is talking about. The CIA has been aware of this for a long time and this is the reason why there has been such as US troop buildup in northern Norway and near Finland, and why the US has been working so hard to bring soldiers into that region as well as the Baltic states and even northeast Poland- because they are expecting that to be a major area of conflict. The Russians know this, and since Russia is in such a state that it is unlikely they will be able to continue fighting on more than two fronts, in the case of a war, it is likely that Russia will be forced to (a) defend Moscow and St. Petersburg first, and then (b) keep the American/Germans out of the Arctic oil fields, since it is possible that while they will try to fight it, they may be forced to sacrifice the Volga region lest she over-extend herself and be able to defend nothing.

This is the real danger that Russia faces, the US knows it, and both are preparing accordingly for war because they both know that it is coming.