You are here: Home › Lightning Bolt Strikes The Statue Of Liberty 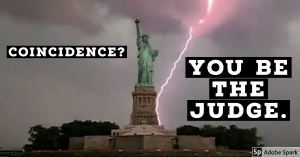 Fox News reports that a bolt of lightning was captured on video recently striking the Statue of Liberty.

How strong is Lady Liberty? Strong enough to withstand a lightning strike.

Suddenly, a bolt of lightning descends from the heavens and strikes near the pedestal of the famous statue – which has served as a beacon of hope for both native-born Americans and immigrants since arriving as a gift from France in the 1880s.

Just as suddenly the flash is gone – with no sign of damage to the statue or to Liberty Island — between New York and New Jersey in New York Harbor — which serves as the statue’s home.

Just two days earlier, the island was partially reopened to visitors after being closed since March because of the coronavirus pandemic. (source)

It would not be the first time that lightning has struck the Statue of Liberty. However, given all the current state of the nation, including the COVID-19 pandemic and the actions of the US in supporting immorality around the world, it can cause a man of faith and genuine care to wonder.

Coincidence? You be the judge, but while many people still continue to sing “God bless America”, the nation that styles herself as a “city of a hill” has not become one on a hill, but on the plains of Middle Ghor, where just like that wicked city of Sodom almost four thousand years ago has embraced all kinds of debauchery, but does not limit it to herself, yet goes out spreading it all around the world and then attempts by violence to compel others to follow in her example and if they refuse, she has the nations persecuted into submission.

It was noted with great interest from people around the world that almost immediately after the resignation of Pope Benedict XVI, lightning struck St. Peter’s Basilica in Rome, at the very top of the cross, as though it were a sign from God about His views on the matter. Now it could be a coincidence- one can make up his own mind as to what he believes may or may not have happened -but the timing was certainly interesting an impeccable given the world situation and the current, ongoing, and seemingly unresolveable crises that have appeared during the tenure of Pope Francis (and not to mention his many surrounding controversies) that have ripped a division between the faithful and is aiding with the continued general march of the world towards war.

If the above was the case, why would it be irrational not to absolutely declare, but to suspect that a similar situation may be in order for consideration as to the events at the Statue of Liberty? It is not at all irrational, but something that any man of care should note, and in doing so, to attempt to amend one’s own life and help others to amend their lives, since time is running short, and as poverty increases and the world situations worsens, that instead of living a life based on consumption and debt, that Americans may be able to- at least some of them -make some better decisions, especially on moral issues, to help shape a better future.

Unfortunately, given the current trajectories, it is unlikely that this is going to happen without being forced to endure a lot of pain.