You are here: Home › One In Ninety-Eight People In California Is Infected With COVID-19 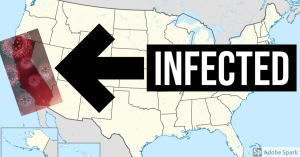 When we talk about small percentages, it can mean very big things. Therefore, it is of great concern that The Sacramento Bee reports by way of Herald Mail Media that one in ninety-eight people, or over 1% of the state of California, is infected with COVID-19.

And more Californians are currently in the hospital than at any other time during the pandemic: Nearly 7,100 people are in a hospital bed with COVID-19, and about 28% of those hospitalized patients are receiving intensive care, according to state public health data released Tuesday morning.

Hospitals in Southern California and the Central Valley are starting to feel the pressure. Other counties — like Sacramento, Placer and Yolo counties, which all have less than 20% of their intensive care beds available — are on high alert.

California Gov. Gavin Newsom announced sweeping shutdowns on businesses and schools last week to slow the record-breaking number of infections and hospitalizations. It will be another week, if not longer, before local health officials see whether the closures have the intended effect.

Sacramento County health chief Dr. Peter Beilenson told The Sacramento Bee on Monday that business openings don’t appear to have contributed to virus transmission “anywhere near as much” as private gatherings are continuing to do.

Still, those reopenings may have given the false impression that the worst of the pandemic was over, county health officer Dr. Olivia Kasirye previously told the Bee.

Local and state officials continue to hammer the importance of mask-wearing and physically distancing from those not in the same household as simple but crucial ways to help slow the spread of the virus.

“At the level of transmission we’re seeing across the state, even a very, very robust contact tracing team in every single county will have a hard time reaching out to every case,” Ghaly said. “No one has anticipated building a program to contact trace the level of cases we’re seeing here.” (source)

There is so much talk about how COVID-19 is not a threat, and that people should not care about it, when the reality is that it clearly is a threat. This is the nature of a pandemic, where a lot of people get very sick, it can kill people, and it has a lot of effects on how people work and live.

If one has not already, put the mask on, respect the distances between people, and try to use good sanitation procedures. This is just basic courtesy at this point, and if you feel sick, please do not go out. It is likely that at this point, most people would agree with the statement that pandemics are not fun an nobody likes them. However, it is even less fun to get sick with the same illness, because diseases do not discriminate on the basis of race, gender, or politics, but infect who they infect because they are able to.

Don’t let one’s own pride or perspective set the way for allowing oneself to be unintentionally infected.