You are here: Home › Yelp Declares That 60% Of Temporary Restaurant Closures Are Now Permanent 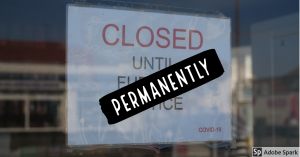 Professional economic forecasters are known to lie because by lying about the state of the economy or a business, there is a belief that sales numbers can be bolstered and growth driven to make up for the declines, which can cause investor panic or a lack of confidence. However, truth is not only always the best antidote, but it also cannot be hidden forever, and one of the best indicators of truth are the words of people “on the ground” who are forced to interact with a business every day. Yelp is an example of such, for the review website for restaurants and other small businesses is also a guide for people as to where they can go for food or shopping. According to the Yelp Economic Report, 60% of restaurants and almost half of small businesses shuttered because of COVID-19 are not permanently shuttered.

While some industries have been able to slowly bounce back with fewer temporary closures, many are still enduring an increasing number of permanently closed businesses.

The beauty industry follows a similar trend as the retail industry with 13,609 total business closures, a decrease from 15,348 in June, as many businesses have been able to reopen their brick and mortar locations. However, the industry has suffered from 1,213 new permanent closures since June 15, totalling 4,897 permanent closures as of July 10.

This is just the FIRST WAVE of COVID-19. I have been continually warning per our observations of the markets at Shoebat.com that there is a strong chance there will be another wave of COVID-19 that will strike and cause even more economic devastation than what is currently taking place, and the reason for this will be because of the same reasons right now- lost revenue, lost time, and the inability of people to make enough money to service bills and debts versus real income. It is simple math, that more is going out than what is coming in, and when this happens, closures are inevitable.

According to a recent conversation with a health care worker I spoke with in a state that has been severely affected by the virus (more so than others), he said that he sees the current crisis as a “marathon” that could last a long as three years, but he hoped it would be shorters since he said that he (being a healthcare worker and subject to extreme masking and shielding) is like many tired of the virus and wants things to return to “normal”.

This Christmas is when, I suspect, a lot of the harsh realities will be forcible exposed, because each year, people are going into more debt to pay for Christmas gifts, and with less ability to pay it back. This virus is the “breaking point” since the virus is going to compel people to make a choice between gifts and essentials, and since essentials will in dire situations always come before gifts, the stores will likely not be able to make enough money this season, and with approximately 25% to 40% of all retail store income deriving from the time after Thanksgiving up to Christmas, it is likely that many retail stores, large and small, will be forced to close. Thus while people may want to think about “sleigh rides”, from a business point of view, it is going to be a Christmas “slay ride” as businesses are economically butchered and served at the table of economic reality for dinner, carved up by COVID-19 and his second wave of viral spread.

The average man must understand that life has fundamentally changed and it is going to get a lot worse. Instead of waiting, he needs to prepare right now with food, provisions, and the tools he needs in order to survive. Life has become much harder and is going to keep getting harder because of the effects of the virus, exposing the ugly economic realities about us, and forcing people to adjust to reality where scarcity is real and after years of financial abuse, the realities of inflation and hyperinflation will have to be confronted.