You are here: Home › Eurozone Economically Collapses During COVID-19 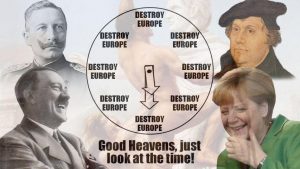 America is suffering loudly from the COVID-19 induced economic problems, but Europe is also doing terrible, as AP News reports that the Eurozone has practically collapsed as a result of the pandemic, meaning major problems for the German economy, which has suffered tremendous losses.

The economy of the 19-country eurozone shrank by a devastating 12.1% in the April-June period from the quarter before – the largest drop on record – as coronavirus lockdowns shut businesses and hampered consumer spending.

Economists say the worst of the downturn is past as many restrictions have eased, but that the recovery will be drawn out and vulnerable to renewed virus outbreaks.

Spain, which along with Italy was among the first to get hit hard by the spread of the virus, suffered the region’s heaviest drop at 18.5%. France, Italy and Portugal also endured steep declines, but no country escaped the impact of the pandemic.

For the currency union as a whole it was the biggest decline since the records started in 1995. The broader 27-country European Union, not all of whose members use the euro, saw output sag 11.9%.

The decline in Europe compares with a 9.5% quarter-on-quarter drop in the United States, which unlike Europe has not yet been able to get its contagion numbers firmly down yet and whose economic recovery is in doubt.

European governments are countering the recession with massive stimulus measures. EU leaders have agreed on a 750 billion-euro recovery fund backed by common borrowing to support the economy from 2021. National governments have stepped in with loans to keep businesses afloat and wage support programs that pay workers’ salaries while they are furloughed. The European Central Bank is pumping 1.35 trillion euros in newly printed money into the economy, a step which helps keep borrowing costs low.

Germany, the largest of the countries that use the euro, went through a 10.1% decline, the biggest since records started in 1970.

In France, the startling plunge of 13.8% in April-June was the third consecutive quarter of contraction in France’s worsening recession. The pain has been so damaging to jobs and industries that the government is talking down the possibility of another nationwide lockdown as infections tick upward again. Finance minister Bruno Le Maire called on French people to spend more to help the economy recover.

“All the growth in GDP seen in the 2010-2019 decade has been wiped out in five months,” said Marc Ostwald, chief economist at ADM Investor Services International. In Italy’s case, economists said it wiped out about 30 years of growth. (source)

COVID-19 is not going away. The irony is that the US is in the best position to weather the crisis. Germany will be annihilated by the economic changes, and this is already beginning.

Be very careful and watch Germany, for as the people become poor and their anger at migrants, which is already very strong, will continue to grow and eventually transform from nationalism to militarism.

The twentieth century is preparing to repeat again. It is very unlikely that individuals can stop this, but one can prepare wisely for the future, which for those who have eyes to see and ears to hear, and know German history, means that war is on the horizon again, just as the economic death of the Weimar Republic paved the way for the rise of the Third Reich.