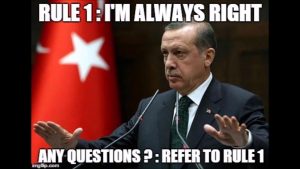 For years, Ted, Walid, and I have warned about Turkish President Erdogan and his aspirations for the Sultanate of old and a revival of the Ottoman Empire. Many said that such a view was an overreaction or a misguided approach of some kind, but based on patterns of historical behavior and statements coming out from the Turkish government, we said that such was a concern.

Now it is not just us who are saying it, but the mainstream publication of Time Magazine is expressing concern at Erdogan’s behavior and where it may lead to.

At the end of August, Turkey’s president Recep Tayyip Erdogan celebrated the Islamic New Year with aplomb. Fresh off his conversion of the monumental Haghia Sophia to a mosque, he converted another former Byzantine church, the fourth-century Chora church, one of Istanbul’s oldest Byzantine structures. The day after that he announced the largest ever natural gas depository in the Black Sea. This followed another recent discovery of natural gas fields in the eastern Mediterranean. Both of these areas are hotly contested zones of international competition between the powers around these seas. Later that week he welcomed a delegation of Hamas to Ankara, where he expressed support for Palestinians in the wake of the recent announcement of an agreement between Israel and the UAE.

All of these moves project Erdogan’s vision of Islamist strength into the world. Standing up for Islam at home goes hand in hand with securing natural resources and imposing Turkey’s power abroad. It also goes hand in hand with domestic repression. The Islamic New Year saw Erdogan further tighten his grip on social media freedom and consider pulling Turkey out of what is known, now farcically, as the 2011 Istanbul Convention, a treaty of the Council of Europe that commits countries to protecting women from domestic violence. Democratic peoples in Turkey, the Middle East, and around the world should worry.

Much has been written about Erdogan’s attempts to “resurrect” the Ottoman Empire or to style himself a sultan. There is truth here. But to understand Erdogan’s political agenda and horizon we must be specific about which Ottoman sultan Erdogan strives to be. It is the empire’s ninth sultan, Selim I. (source)

One need only recall that it was last July when Erdogan ordered reconverted Istanbul’s iconic 6th-century Hagia Sophia church into a mosque, after almost ninety years serving as a museum. He then proceeded to convert another historic former church, the 4th-century Chora church, one of Istanbul’s oldest Byzantine structures, back into a mosque. Ltikewise, this comes at a time when the government has now just destroyed the historic St. Georgios Christian church late Wednesday, known as the “Hagia Sophia of Bursa” and was respected by Moslem and Christian alike.

The pattern here is very clear. Turkey is returning to her Ottoman ways, and it seems that with the 100th anniversary of the abolition of the Caliphate and the creation of the modern secular Turkish state under Ataturk, Erdgoan may want to see that Turkey “reverses” course back to her old ways, thus making like what the Crusaders states were in the Holy Land- a small “bump” on the larger pattern of history -a small “bump” in Turkish history, just a small delay from the larger pattern of taking her place as the “Ottoman menace” that she was previously know for almost seven centuries and likewise as a Turkish ‘terror’ since the migrations from Central Asia starting during the 8th and 9th centuries to the Middle East.

History has a nasty habit of “repeating” itself, and this is what it seems that we are witnessing. Given that the European empires are showing signs that they want to “stretch” their “military muscle” once again, it makes sense that Turkey wants to do the same, except back into the Middle East as an imperial power.

Saudi Arabia, as we have also noted, is very aware of this, and is scared because an increase in Turkish power is a direct threat to their survival. The rise of the House of Saud to the levels of power that she has been able to acquire directly correlates with Anglo-American support of her regime, and if the Americans were to withdraw in any way, Turkey would fill the vacuum, and as noted, they are happy to see the entire Saud family hanging from khazouks in the middle of the desert as the vultures feast on their dead carci baking in the hot sun.

Since Germany and Turkey have a long shared history- no matter what the form of their nations is (Empire, Sultanate, or just warring tribes) -it will be interesting to see how Turco-Teutonic collusion take shape in the future and what this relationship will work with, especially considering that Russia, the great power to the east, is a historical Turkish enemy but also a temporary Germanic ally.

But that is just speculation. What is not for speculation is that Erdogan sees himself as a new sultan of sorts, that he is serious about the matter, that he wants to revive the Ottoman Empire, that he hates Christianity, and that he is a serious danger, and most importantly, for the sake of historical note, that it was the US and Germany after World War II who are directly responsible for building Turkey back up into a major power in the name of fighting the Soviet Communists, and thus in defeating one monster, they may have inadvertently created another and worse monster that is breaking out of its cage and like Frankenstein, or perhaps “Iron Man” from Black Sabbath fame, will “kill the people he once saved”- not that Turkey saved anything, but that they lost control of their own creation and now it has turned against them.

Claim: Trump In Private Calls Dead Soldiers “Losers” And “Suckers” For Fighting For The USA
Report: 90% Of COVID-19 Tests May Be False Positives
Follow