You are here: Home › Forget About Metrosexuals, It’s Now Technosexuals 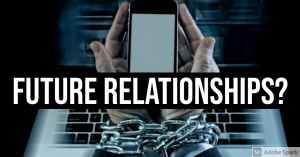 Years ago there was discussion about the rise of ‘metrosexuals’, or effeminate men who confused personal grooming habits with those of effeminate behavior. Three decades later, a new trend has emerged, building off of this plus the increased isolation, reliance on technology, obsession with status and attention, declining incomes, and the depersonalization of human interactions, which according to the UK Telegraph by way of Yahoo! News is the rise of the ‘technosexual’, who equivocates personal gratification with any number of things from attention from others online to the use of technology for the same end in a more direct way.

the pandemic wasn’t a surreal enough experience, a recent study suggests that lockdown has amplified a disturbing trend. Research by sex toy company WeVibe revealed that 14 per cent of men admit to being aroused by their smart-speaker Alexa, which confirms my view that we have been sleepwalking into a different kind of epidemic – one of loneliness and fear of intimacy.

I’ve been a practising psychotherapist for 20 years, and never have I worked with so many men and women who are unhappy and scared because their deepest attachments and primary source of arousal are through interacting with their tech. I call these people ‘technosexuals’.

Technosexuals are joined – as though surgically – to their favourite gadgets. Whether it’s the ‘ping’ of a message, swiping right, or the seductive, authoritative tones of a cloud-based voice service, their tech fulfils them by mobilising the reward system in the brain and releasing dopamine – the ‘happiness hormone’.

The instant activity of using their tech – likes and comments – is like a sexual turn on. This ‘dopamine hit’ happens in all of us but, in technosexuals, something else is at play.

For them, the modern digital world influences all their libidinous activity. It dictates who they fancy, and how they present and value themselves.

Technosexuals fall into the trap of mistaking connections via tech with actual intimacy. Single technosexuals write witty messages ahead of dates which often never take place, or get set up and then cancelled at the last minute – and not just through fears of coronavirus. Covid is giving air-cover to their fears. And because tech can provide the illusion of intimacy, many technosexuals convince themselves their intimate life is functioning – when it really isn’t.

On face-to-face dates – even socially-distanced ones – technosexuals can become overly-anxious. The phone in the pocket or bag becomes like a child’s ‘security blanket’, something to be touched or looked at regularly to provide comfort. Technosexuals will go so far as to crow-bar their tech into actual dates as much as possible, using phones to Google trivia, display photos, showcase apps, or tot up the bill. “I appear really outgoing and engaged on dates,” admits Jess*, 39, “but really it’s my smartphone performing, not me.” (source)

The observations here can be easily seen in the dating market, where people are less inclined to interact with each other, and instead prefer virtual interactions through devices. It is an extension of the continuing trend of depersonalization, self-isolation, and really, the final stage of the sexual revolution. If the first stage was the separation of men from women and the conflagration of their social roles (the feminist/women’s rights movements), and the second stage the separation of sexual behavior from reproductive purpose first (birth control/abortion/sodomy), the final stage is the division of sexuality from human interaction itself, making a wholly self-oriented pursuit that does not require a person at all but is solely involved in self-absorbed behaviors.

There have been many scientists who have expressed surprise that sexual relations between men and women, at a time when sex is everywhere and easily accessible, is in decline, for while a top few of men are getting more sex than ever before, most get not a single thing, and instead are isolated. This is, one could argue, a manifestation of this ‘technosexuality’, where like what Japan already is at, there is an evisceration of man himself and his place in society that results in a hole filled with empty pursuits based on the idea that there is no meaning or purpose to life except trying to gratify oneself until his death. It is also why secular marriage is in decline, because if one does not believe in a greater purpose to life, what is the act other than an unnecessarily difficult step to getting to the same end?

In a sense it can be said that society is going back to pagan times, just as it was in the ancient world. With that, Christians are once again going to become a hated, rejected, despised, yet also strangely admired minority, for to be a Christian will mean not fame, power, and money, but sacrifice, silence, suffering, persistence, perseverance, and hoping against all odds in God, Who surely in the fullness of time will come and make all things right.