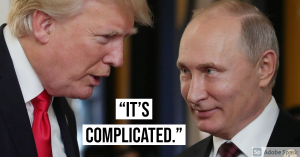 Former director of national intelligence Dan Coats could not shake his “deep suspicions” that Russian President Vladimir Putin “had something” on President Trump, seeing “no other explanation” for the president’s behavior, according to Bob Woodward’s new book “Rage,” which was obtained by CNN ahead of its publication next week.

Why it matters: Coats was the president’s top intelligence official from March 2017 until August 2019. Woodward reports that Coats and his staff examined the intelligence regarding Trump’s ties to Russia “as carefully as possible” and that he “still questions the relationship” between Trump and Putin despite the apparent absence of intelligence proof.

Between the lines: The New York Times’ Michael Schmidt reported in his new book that former Deputy Attorney General Rod Rosenstein secretly curtailed an FBI counterintelligence probe into Trump’s ties to Russia, meaning the full scope of decades of the president’s personal and financial dealings there has never been explored.

The big picture: The explosive Woodward book, which is based in part on 18 interviews that Trump sat for with the veteran journalist, details the “tortured” tenure of Coats and other officials described by the Washington Post as “so-called adults of the Trump orbit” — including former Defense Secretary James Mattis and former Secretary of State Rex Tillerson.

At one point, Mattis went to Washington National Cathedral to pray for the country’s fate under Trump’s leadership, according to the Post’s report on Woodward’s book. He reportedly told Coats, “There may come a time when we have to take collective action” to speak out against Trump because he is “dangerous. He’s unfit.”
In a later conversation reported by Woodward, Mattis told Coats, “The president has no moral compass.” Coats reportedly responded, “True. To him, a lie is not a lie. It’s just what he thinks. He doesn’t know the difference between the truth and a lie.”
The other side: “The Bob Woodward book will be a FAKE, as always, just as many of the others have been,” Trump tweeted on Aug. 14, before the book had come out. This is despite the fact that the president sat for 18 interviews with Woodward. (source)

Woodward puts forth an interesting thesis, and one that should not be immediately dismissed because of political inclinations. One should recall that Woodward, no matter what one thinks of him, is not a buffoon, but a respectable and highly respected journalist who takes his work seriously. No amount of twitter rants from Trump can dismiss this.

His observations hold some accuracy- for example, about Trump’s clear lack of a moral compass at all, or even a sense of personal accountability. This is consistent with his statements versus his actions and his response to them.

But this goes beyond Woodward, for he writes about Coats- who is not a fool and was working in the administration in a serious job in intelligence and has a serious history in his profession -believed that Putin HAD something on Trump, implying either (a) an incorrect assessment of the situation or (b) that there WAS (past tense) something but has since ceased to have said thing over him- for the sake of irony, perhaps a “Trump card” of sorts.

What that is- if it actually existed -we do not know and may never know. What we do know is that fighting between the USA and Russia is very common, as it is an extension of the Great Game, and that in spite of Russia’s serious decline, she is playing very strong games against the US and given Trump’s ties to Russia, it would not be uncharacteristic of him to have done something unpleasing that could be used against him. Such is the story of many intelligence agencies throughout history no matter what the nation is. Indeed, something that can be said about the Russian intelligence, in addition to their highly skilled efforts at bluffing and history of using poison to assassinate political or social enemies, is that they are excellent at spying on and blackmailing people over personal matters, probably equal to the Americans (from personal assessment), but less effective in applying said blackmail or keeping their particular “cards” under the “poker table”, and because of this what may be a clever plan can seem to evolve into a “Boris and Natasha” type scheme.

We don’t know much, and I do not wish to speculate. What I want to emphasize is that this man who made these statements is no fool at all, but an intelligent person, and given Trump’s actions- such as how he changes administration personnel arguably as often as a parent has to change the diaper on a baby -does not so much suggest a sort of grandiose conspiracy against him, but rather that it is his personal difficulties and problems that cause him to replace people. One can see this in a company, for a good company is not one that is always hiring new people, since it means that either/or (a) they cannot retain good people because of a bad environment or (b) they are seeking to abuse people, use them up, and then flush them with new people, or (c) it is badly managed.

Certainly there are evil people, but one cannot say that all of the people in DC are in a conspiracy against Trump, especially when the head of the FBI and other major people who all would seem to want at least the nominal good will for the country come out and say, in different ways, that ‘hey, there are some funny ties between Trump and a serious national enemy, this needs to be looked at’, and Trump says that it is just the words of the ‘Lügenpresse’ and to ignore those because he knows better.

I have said this before and I will keep saying it- Trump was given not the chance of a lifetime, but the chance of history to do something good, and he has absolutely refused to do this. Likewise, the serious allegations against him not rooted in malice, but genuine concern must not be carelessly dismissed as fancy lest one fail to carefully examine serious matters in their just detail.

In The Midst Of America’s Decline, Old Regional Powers Are Working To Revive Their Empires
AI-Written Editorial Says It Won’t Destroy Mankind While Declaring It Will
Follow