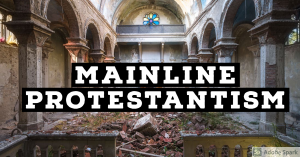 If one looks at the US, one can say that many of the founders were of Anglo stock and were either a variant of English Protestant Christian persuasions, sometimes known under the title of “mainline Protestant”, or a sort of agnosticism under an equally diverse list of names. But whatever one was, the fact is that “mainline Protestantism” has been a fixture of American life since her formation. However, as the AP News reports, in the recent election campaign, candidates passed over mainline Protestants in favor of Catholics and Evangelicals.

The images were vivid: President Donald Trump brandishing a Bible outside an Episcopal church in Washington that had been boarded up amid racial injustice protests. Episcopal leaders reacted with outrage at what they deemed a cynical photo-op.

“He didn’t say a prayer. … It was used as a matter of partisan politics,” said Michael Curry, the denomination’s presiding bishop.

That flare-up was notable for another reason. It’s one of the few times that a mainline Protestant denomination entered the national spotlight amid a volatile election year abounding in political news about evangelicals and Catholics.

There’s been a steady stream of news about certain evangelical leaders — their close alliance with Trump, their occasional defiance of coronavirus-related restrictions on worship services. Meanwhile, Trump’s Democratic rival, Joe Biden, is being assailed by some fellow Catholics, including bishops, for his support of abortion rights.

Rarely garnering national attention are the mainline Protestant denominations that dominated America’s political and civic leadership for much of its history, beginning in colonial times.

These denominations, including the Episcopal, United Methodist and Presbyterian (U.S.A.) churches, are now deeply engaged in campaigns against racism and voter suppression. Yet they haven’t generated controversies this year as headline-grabbing as those involving evangelicals and Catholics.

“But my experience has been, in every city I’ve lived … that many mainline Christians do the heavy social lifting in their communities on issues such as homelessness and food insecurity.”

Mainline Protestantism has been in decline for a very long time, going back to the early 1990s, when the Presbytarian Church recognized that unless birthrates or conversions increased, there was a strong chance that a lot of the church would disappear. Three decades later and they are seemingly correct, as their denomination is in decline and now considered politically irrelevant so much that the current election ignores them.

Political parties seldom care about religion, God, faith, or anything else outside of the context in which it gives them power. Catholics and Evangelicals, while inclining to Democrat and Republican parties respectively in a historical framework are also divided on many issues and a source of votes, and they have a lot of people in them, so politicians look to use them.

But where is mainline Protestantism today? It is almost gone. They have few children, they have no real power or numbers any more, and so no one cares about them.

Demographics- as blocs of influence -change over time, and if a bloc loses influence for whatever reason, political parties are not going to care about it. It may seem to be cruel, but this is a reality. We are seeing a major social change right now, and it is true that Christians and Christianity at large will lose the current levels of influence that exist, and this is part of it, but rather, it is moreso a reminder of the power of gradual change, and that because something is one way right now is not a guarantee that it will continue to be so in the future.

Anarcho-Queer And Loving Demons- The New Face Of The GOP
“Prophet” Of Florida Church Goes To His Wife’s Workplace, Takes A Gun, And Shoots Her In The Head Multiple Times
Follow