You are here: Home › Will The Fed Keep Interest Rates Low Through 2023? 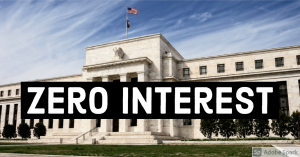 Federal Reserve officials on Wednesday projected that they would keep interest rates near zero through 2023, as it aims to help the economy fully recover from the coronavirus pandemic.

The central bank expects the U.S. economy to shrink by 3.7 percent this year, a more optimistic forecast than its June estimate of a 6.5 percent contraction, but that number would still be much worse than 2009 — the worst year of the Great Recession — when GDP shrank by 2.5 percent.

Fed policymakers now expect unemployment to drop to 7.6 percent by the end of the year, also a somewhat more hopeful outlook than before; the current rate of 8.4 percent is already better than where Fed officials had previously thought the job market would be by December.

The central bank also shed more light on its pledge not to raise interest rates until prices begin to rise more rapidly, part of a bid to allow the unemployment rate to drop as low as possible and to avoid choking off a recovery too early.

Because the central bank has undershot its inflation target for so many years, it’s now trying to overshoot for a time so that inflation will ultimately average 2 percent.

On Wednesday, the Fed pledged not to raise rates until “inflation has risen to 2 percent and is on track to moderately exceed 2 percent for some time.”

The way that interest rates work is in proportion to their ability to stimulate economic purchasing or contract it.

One can see there is an inverse relationship that will move up and down like a sort of wave, but overall is about making a balance, and the purpose of the Federal Reserve Bank is to try to adjust these rates to either drive inflation of certain asset classes through spending or to restrict it. In this sense, it is a sort of a planned economic tool that can be used for good or for bad.

The problem with the US right now is not one of supply or demand, but rather the nature of the money itself. As I have noted before, we are experiencing hyperinflation type conditions, which is the loss of faith in a currency due to debt and it being backed by its ability to service debts it no longer can service.

Fiat currencies are also not always bad. They have a lifespan of about 50 years, and at that time, usually need to be changed out lest very bad economic problems happen. One may wonder in the Bible about debt “jubilees”, especially the large one celebrated on the 49th or 50th year (depending how one looks at it), and can say that it is important because it is that year which cancels out most debts in society. This is the equivalent to, from an economic point of view, issuing a new currency because the debt levels are what cause hyperinflation, as money is printed in oversupply to service debts and eventually the money itself loses value.

What the Federal Government is doing by keeping interest rates low is to attempt to stimulate the economy through consumer spending (the basis of the US economy for over fifty years). However, people cannot spend money because they are so indebted that any money they have must go to service debts. This is the conundrum that the US population finds herself in, and because of this, one is facing an unwinnable battle against debt that either must be solved by a return to a production model that will enable wealth to be generated to pay off debts (which likely would not happen because of the incredible size of the debt, as it is the largest in world history), to default on the debt (not going to happen because it would mean that the US’s creditors could collect, which is not going to be allowed, a jubilee (which means dealing with the financial problems in society by arresting bankers involved in making the debt crisis and that is not going to happen), or hyperinflation to destroy the currency (the most politically acceptable because while it would hurt the whole country in awful ways, it would be blamed on a random third-party so that those who caused the situation cannot be blamed, they can remain in power, and the debt can be discarded).

The recent Families First COVID-19 Stimulus Bill that Trump signed into office is a virtual guarantee of hyperinflation, for as I have noted, it takes the whole budget for Fiscal Year 2019 and spend it with one single payment. With spending such as this, it is only a matter of time before the perception of the US dollar as as stable currency will run out and a reckoning will be forced with it, and when it is discovered that the currency is worthless and this is acknowledged by the world, that will be the point when the real troubles begin, and no money manipulation can save anybody at that point, because it will either be pay the debts, go into bankruptcy, or abolish the debts, and those in power would rather pay it with fraudulent money at the expense of all than hold accountable those individuals and institutions which brought about the problem to begin with.

Oregon Police Chief On The Horrendous Fires: “We have good reason to believe that there was a human element to it”
Younger People Don’t Care About The Holocaust
Follow