You are here: Home › Study: One In Five Evangelicals Believe In Gender Fluidity 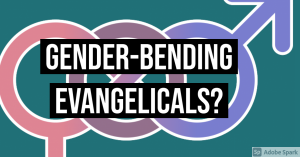 Gender is a simple thing to understand, and it should not require much effort. However, with all of the confusion about the most basic of human things, even this has been thrown into disorder, and religious people of good intentions are also affected. Thus it is that according to the Christian Post, a new study has shown that one-fifth of Evangelicals now believe in the idea of gender fluidity.

A new study has revealed that 22% of U.S. evangelicals appear to reject the Bible’s teaching that the gender of a person as male or female is given by God, the Creator, and instead believe in “gender fluidity.”

While 73% of American evangelicals disagree that “gender identity is a matter of choice,” 22% say they believe in that statement, according to the LifeWay Research “State of Theology” poll released Sept. 8.

Further, the poll reveals that Americans in a rural area (56%) are more likely to disagree with gender fluidity than those in a large city (45%).

Attending religious service also matters, as the study found that Americans who attend a service at least once or twice a month are more likely to disagree that gender identity is a choice than those who do not (57% vs. 47%).

The same study says that the trend is moving in a positive directing, citing a one-third decline from 32% support to 22% in four years. However, one does not know further statistics, such as a generational breakdown, or the percentage of those practicing versus decline, as we know that the latter is taking place.

These statistics, unfortunately, are not complete, and more detail would be required to explain them. That said, it is still a concerning sign that one-fifth of people would oppose a teaching so fundamental to basic Christian belief, and something that is so obvious it should scarcely need explanation even in a natural sense, as the functions of gender are evident all around man. If confusion about such a basic issue should persist, then it does not bode well for the world, which one may argue has forgotten how to reproduce save to generate more dysfinctions, which does not lead to hope or a better tomorrow, but always to inevitable death, since unhealthy things inevitably self-destruct lest they are remedied.