You are here: Home › Even Trump’s Campaign Manager Did Not Vote For Him

By Andrew Bieszad on September 18, 2020 in Featured, General 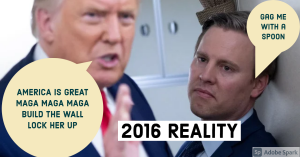 Trump is having a formidable challenge this 2020 election cycle, as a lot of people just do not believe in his promises because of years of betrayal. According to Chron, it is being reported that Trump’s own campaign manager did not vote for him in the past election in spite of his work for Trump, as he did not vote for anybody.

President Donald Trump’s campaign manager didn’t vote for his boss in the last presidential election. He didn’t vote at all.

The last time Bill Stepien voted, according to public records, was 2015 when he lived in New Jersey and was registered there.

Stepien registered to vote in Washington, D.C., where he’s been living since 2017, at the end of July – two weeks after he was tapped to take over Trump’s reelection bid.

He wasn’t registered in either New Jersey or Washington to vote in the 2018 midterm elections.

Neither Stepien nor a campaign spokesman responded to further questions about his voting record, including whether he made additional efforts to obtain a ballot or considered voting in person to support Trump.

Trump, who this year voted by absentee ballot in Florida, repeatedly has attacked voting by mail, claiming without evidence that it is susceptible to widespread fraud and corruption. He has encouraged people to vote in person amid the coronavirus pandemic to ensure their vote is counted, even suggesting they try to vote once by mail and once at their polling place, which is illegal.

Stepien, however, appears to be the first high-level aide not to have voted in the 2016 GOP primary or presidential election when Trump was on the ballot.

Christie fired Stepien in 2014 amid the Bridgegate scandal. Christie had ordered most lanes closed on the George Washington Bridge, the nation’s busiest, to Fort Lee, N.J., to punish the city’s Democratic mayor for not endorsing Christie’s reelection bid. The Supreme Court in May overturned the fraud convictions of two Christie aides in the scandal.

Stepien joined Trump’s campaign in its final months to oversee field operations and help strategize which states to target.

New Jersey, where Stepien would have voted in 2016, was not one of them as it reliably votes Democratic in presidential elections. (source)

Since there does not seem to be a legal reason why he did not vote, it is a strange thing. One can only guess why, but perhaps after years of working in politics, and having a thorough view of both sides, one can only wonder if he thought that both candidates were awful and neither deserved his vote.

There is no good option this fall at the polls, and while many say that Trump is the lesser of two evils, what one will likely get is neither hope nor change, but just a different form of the same problems, the difference being that the Democrats are more direct and the Republicans at this point, by their actions, merely a version of “Democrat-lite” in many cases.

Did Putin Just Walk Into Another Afghanistan?
The Death Of Ruth Gader Ginsburg Will Help Trump Defeat The Democrats
Follow