You are here: Home › Rev. Franklin Graham Declares That The US Is Falling Apart And That God Is Her Only Hope 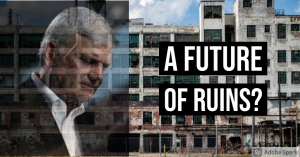 Riots. Death. Destruction. This is what so many people see in the US today amid mass rioting, chaos, and disorder throughout major cities, and does not include the economic problems, social decline, and the sense that so many have that something just isn’t right from the way that things once were some time ago. It is clear that amid the rising paganism, a rejection of Christianity, and its replacement with all kinds of heathen behavior, whether it is the advancement of the willful murder of the innocent, the promotion of sodomy, the oppression of the worker, financial exploitation through more cunning forms of usury, or even other manifest evils, the US is changing fast and for the worse. Reverend Franklin Graham, son of the famed Protestant preacher Billy Graham, has said that the US is falling apart and that God is her only hope as per a series of recent statements made to the Christian Post.

“I think there’s kind of a boiling point here with many people. We have seen injustice on our streets and some of our communities. The frustration that people aren’t heard, that people are marginalized. It seems that all of this is boiling at the same time,” he said, noting that these tensions are accentuated in an election year where politics often exploit the issues.

Yet no one can solve the spiritual darkness besetting America, he emphasized.

These words, while they might be in a sense hackneyed and some may even go so far as to consider them trite, are very true, since if God is the essence of all things, if he is truly supposed to be the center of one’s focus, then the rejection of God from American life is simply giving way to its natural consequences.

This rejection of God, however, is not a new phenomenon. The US has always been at war with God in some way, and this is made evident by the forms of Christianity that she tends to favor. Christianity, or perhaps, “Christianity”, has been throughout the history of the US often tied to nationalistic sentiments or political movements. There is a certain overlap here in the sense of how religion has been used in the Germanic lands, for as far back as the Protestant Reformation (for the consideration of the last five-hundred years of history), Luther’s successful revolt that moved other revolts of a similar nature from small sects or general complaints into mass action supported by the government authorities was ultimately about a fight that has always existed in Christendom, which is the role of the Church to the state. It is too long to give it the proper treatment it deserves here, but the essential historical fight that I speak of, and one which has always existed even going back to the Old Testament, one could argue, is the struggle between the relationship of nation to religion. In the Catholic sense, the Church partakes of both the ruling powers as well as the ruled, and is the glue that unites and separates them, for their mutual benefit, at the same time. Since so much of human life can be written as a contest between rulers and ruled, only to have the ruled become the rulers and the rulers the ruled in an almost karmic-like cycle that will endure until the Second Coming of Christ, there has always been a desire from governments to assert their authority using the influence carried by religion, and in doing so thus subjugating the Church to the state by whatever tools are necessary and to leverage it as a battering ram against the ruled without regard to the Church or the ruled. It does not matter to such men if the Church is destroyed in the process, because it is viewed as a means to an end that ultimately can be disposed of once its usefulness is seen to have served its purpose.

God and His ways have been removed from government, schools, and in society more broadly when the country needs more, not less of Him, he said, adding that the United States is “crumbling.”

“I don’t see our nation able to go much further unless we repent and call upon the name of Almighty God,” he said.

A philosophical problem with America, and one that is not a new one but is a very old and enduring one, is that the ideals of the US were never Christian in themselves and neither were they structured to be so, even with the use of Christian language. While many people in the US associate or in the past have associated with some form of Christianity, there has never been unity among the groups in their theology (the most important aspect) or political structure, and all has been defined by disunity save for the two points that (a) they are not Catholic and (b) the government guarantees freedom for all different religious groups. The effect of this is not just to reject theological orthodoxy and the historical continuum of belief from the past in favor of a manufactured religion based on experiences (that are subject to change), but in the name of a false sense of Christian piety to embrace government as an authority over the churches, thus by choice or accident subjugating them to her in society and making them her mouthpieces, and in doing so, also abolishing their own authority in time, for as I and others have pointed out, from a philosophical viewpoint, if religious piety and good citizenship are directly related, one does not need to go to Church or even be a Christian to be considered a good citizen, and it is only time before religion is reduced to the role of a meaningless social club for those who prefer to awaken on Sundays to not the best music (often times) with a group of people they would rather not spend time with.

“For many in the church today, they’re comfortable and a lot of our pastors don’t want to rock the boat,” Graham said. Many will not speak out on hot-button social issues, insisting such topics are “political” when they are moral matters where churches must be bold.

Political topics, and even many topics of public morality are not going to help anything at this point. The country is in trouble because of systematic issues, and as I have made the point many times in the past, the time to fix such problems was decades ago. There is nothing that a man can do right now to repair many of them accept for accents or individual and in some areas, point-by-point cases. Most of the things considered as or directly related to problems are things that the people want, and so have invited them in. The embrace of the sodomitic agenda is one of such, for the time to stop the rise of this was decades ago, not now as the movement is asserting itself in political power as a minimum of 75% support it, and based on numbers extrapolated from it, may go as high as 93% for those under 40.

It is true that the US is suffering and that she needs God. However, the God she needs is the one true God of Sacred Scripture and Sacred Tradition. She does not need the false god of nationalism masquerading as Christian piety, and she certainly does not need to start arguments and fights with a culture that is actively rejecting her unless her goal is to only speed up the natural process that began because of the apathy of many Christians and for which the time to deal with it was decades ago.

I am not saying the US is going to “die”, or that “America is finished”. I am saying that nations go through good and bad times, and they change with the actions of the people. I am also saying that while it is good that Christians want to support their nation, religious faith can never be bound to but must be separated from national sentiments, for God is the author of all nations, and while it is good to help one’s nation, one cannot help one’s nation at the expense of dogma, nor must one change oneself to save a nation that does not want to alter her immoral behaviors in the name of religion.