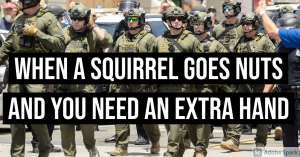 While there is very little worthwhile that can come from the purported ‘wisdom’ of movie stars and popular culture figures, they can teach lessons at times by their behavior toward others about social trends and who we (a nation) or others are as a people. Such an example recently came up when the well-known actress Alyssa Milano, know for her ‘defund the police’ advocacy on social media, took to calling police and wasting resources while cowering in fear over what was a teenager shooting squirrels.

They allegedly told the emergency hotline the sound ‘scared their dogs’ and made them feel like the gunman was nearby.

A description was given of a suspect to the officers who was ‘male, 40-years old, with long rifle’.
The two, who have been married since 2009, were also concerned that it may be someone stalking the former Charmed and Who’s The Boss star.

In 2008, Alyssa filed restraining orders against alleged stalker Jeff Turner, a then 54-year old man she claimed twice tried to break into this same home.

The ‘Nextdoor’ neighborhood app was rife with concerns.

‘Just drove by about 12 armed officers on Bell Canyon Road,’ one resident wrote, ‘They are responding to a call reporting a man with a gun in the neighborhood!! This was also the cause of the helicopter. Stay inside, stay safe!’

The search by air and street level lasted over three hours and ended abruptly at 12.20pm.

‘It turned out it was a neighborhood teen with an air gun shooting at squirrels,’ a resident told the DailyMail.com.

The male teenager witnessed the emergency response and later realized he was the cause and turned himself in.

The officers then had an impromptu meeting with some of the residents in the Bell Canyon community center, confirming what they dubbed, ‘Squirrelgate.’ (source)

A very long time ago, my grandfather had told me he used to take his gun to school with him on his bicycle, and after school he would go with a friend to shoot rats at the local dump. He said that one day a police car came up and asked him what he and his friend were doing, and they said they were shooting rats, and the policeman just responded ‘oh’, and talked with the then boys, and then went on his way. This was the only negative encounter they had with them.

Now, we see in this story, a teenager shooting squirrels- essentially rats that climb trees -in his neighborhood had to ‘turn himself in’ to police because his neighbor, a washed-up actress with a list of worthless opinions and two abortions to show for them, now has potentially ruined his life because of her selfish behavior over something that is a non-issue.

What crime is this teenager doing? There is no crime committed, because no one was injured and no property damage was sustained. Instead, it was a crime against a person’s inflated ego and selfish desires to ‘have cake’ and eat it too.

I could care less about the ‘actress’. I have a lot more care for the teenager, because “gun crimes” are often prosecuted very heavily in the US and can cause permanent, irreversible restrictions upon one’s life, especially if it is classified as a “felony” or as a misdemeanor that is not able to be erased (for example, many domestic violence charges).

Likewise, there is also the issue of overreaction because of the word “gun”.

It is true that the US is filled with a lot of people who are unbalanced and do unbalanced things. There is a long history that testifies to this and cannot be denied. It is in the interest of police to be very careful, and sometimes, to take extra means to protect themselves.

But who investigated what was happening before sending in the police “full force?” As the story noted, this was a tremendous expenditure of resources, time, and labor, and over something that really did not need it.

This is a part of the “unbalanced” aspect of the US which overemphasizes certain things- be it ideas, crimes, or other things -while denying others. A man who has a “gun” tied to anything with a possible crime is veritably eviscerated in court, while a man who steals millions or even billions (such as Jon Corzine) may walk away with no more than a fine and an almost clean record.

Likewise, this unbalanced attitude can be exploited. What is to say that a person with malicious intentions could not call in threats that are fake, simply to consume time and resources consistently, while sapping the department of its morale?

The unifying theme behind this and social trends is that all societies are based on (a) a sense of shared morality or ethics that manifest as a social contract, (b) the ability to respond in a balanced way to problems, and (c) the ability to pursue justice in a balanced way on a multiplicity of issues. Imbalances always exist and will need to be corrected, but the standard of operation for too many and for too long has been to use social tension as a pendulum-and-battering ram against other groups of people for the benefit of some at the expense of others, holding themselves to one standard and the rest of society to another.

Just look at her response. She eviscerates police and demands their abolition, yet from behind the comfort of her gated community, she practically cowers in fear over a teenager doing what they did for so much of American history, and now may have ruined his life while begging for the very police she publicly condemns for the common man to serve her in full force.

This is not just an example of ‘leftist hypocrisy’, which is real, but is found on the right as well. This is an example of the ongoing breakdown of the social contract in the US and the creation of the ‘have’ and ‘have-not’ classes that have no connection to each other and thus no care for each other, and as the ‘haves’ are able to exert power over the ‘have-nots’, use that power to batter down the ‘have-nots’ while they demand special privilages for themselves, thus perpetuating real abuse of real people regardless of race or place.

All societies need police, and crime is real. However, the ability to properly maintain peace and enforce laws is to have a citizenry that is more than a connection of random consumers in an economic machine that live apart from each other and seek their own will, each in proportion to his means and ability to exert it over another man as in a sort of animalistic, darwinian struggle, but as something of a people with a shared sense of community, history, and identity in the most positive sense. This latter part is unfortunately what is so hard to be found today in the US, and the ugly head of the former is the norm that rears its head through examples such as this case above. This is something that no police can do lest they become tyrannical- which did not happen and is not the discussion in this case -because the only way to enforce order on a group of people who have no ties or sense of duty to each other is the power of brute force and violence, as the lessons of history consistently show.

It’s not about an actress. It’s about a principle that is in danger as the US turns more from what she was into not a brave new world, but a terrible old nightmare that has come from the old world to the new world that turns a squirrel shoot into a federal case.

Vatican Asserts Catholic Dogma, Says That Those Who Choose Euthanasia Cannot Receive The Sacraments
How The Lebanese Civil War Teaches Us That Nobody Understands The Middle East
Follow