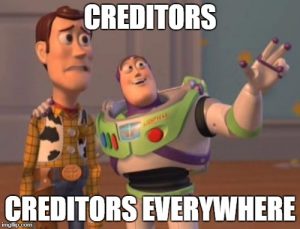 I have said that a major trend to watch for is going to be not a “Christmas Sleigh Ride”, but a “Slay” ride because the US consumer-based economy is being utterly destroyed before our very eyes as people are so broke and owing to the lack of money in circulation and the fact that the US consumer is completely tapped out on his ability to access debt due to the debts that he is already burdened with and as he can barely, if even pay, his basic bills for survival, it is forcing at some point an economic day of reckoning. COVID-19 did not cause this, but only facilitated an inevitable process by interrupting the normal economic cycle for a period of time that could also serve as a scapegoat for the inevitably destructive effects that the coming economic crisis would have and which should have been dealt with in 2007 and 2008 but never happened because it was delayed by money printing.

It is not a surprise then when the Wall Street Journal reports that retail bankruptcies have now reached record rates.

Retail bankruptcies, liquidations and store closings in the U.S. reached records in the first half of 2020 as the Covid-19 pandemic accelerated industry changes, particularly the shift to online shopping, according to a report.

This year is on pace to rival 2010, when 48 retailers filed for bankruptcy in the wake of the 2007-09 recession, BDO said. Retail bankruptcies in 2020 have already surpassed the 22 such filings recorded last year.

Based on my estimations, this year may be the worst on record, but even worse is coming. As I noted, the fundamental problem is the debt levels and the inability to service the debts. This is not an “American” problem but a historical problem common to all cultures, and the historically unprecedented levels of debt in the US magnify the problem and its effects, thus not making a change in their essence but only in their intensity.

The real determining factor for whether this happens or not will not be seen until at least November and December, and its full effects will not be understood or the system shock realized until the end of the first quarter of 2021, since that is when the most complete economic reports will come out that will show the actual sales numbers. This is because the period from Thanksgiving to Christmas makes up 25% to 40% of annual income for many retail businesses. Considering that major “big box” type stores run on margins as thin as a blade of grass, and how so much of the viability of many stores are forced into the last part of the year, there is a lot of intense pressure to ‘make sure’ that spending happens.

But so far, almost all of 2020 has been dominated by the effects of COVID-19. After months of shutdowns and in some cases lockdowns that are continuing, the economic disruptions have been so bad that people who are thinking about spending money on gifts now have to concentrate what few resources they have on paying bills to try and not lose their living spaces, be they homes or apartments. Christmas spending will happen, but the question is the rate. Namely, will there be enough volume of spending to keep the US economy going, considering that it is run by consumerism and this is the most important period in the year for powering that engine through the coming year?

Government-mandated store closures and social-distancing measures have intensified challenges that were facing bricks-and-mortar retailers before the pandemic, according to BDO.

“The trend is still a lot of liquidations and asset sales, and some of them are still trying to reorganize and emerge,” said David Berliner, a partner in the business restructuring and turnaround services practice of BDO.

Consumers stuck at home due to the pandemic are buying more online than ever, the report said. That trend comes on top of excessive debt, store saturation, high unemployment and changing shopper behaviors. Demand for business attire and outfits for social occasions, in particular, has cratered.

High rates of bricks-and-mortar store closures are expected to continue, BDO said. From January through mid-August, retailers had announced they would close a total of more than 10,000 stores in the U.S., including locations of solvent companies such as Macy’s Inc., Bed Bath & Beyond Inc. and Gap Inc.

That has already topped last year’s record 9,500 store closures. Many of the closings through mid-August 2020 were due to retail bankruptcies, which accounted for nearly 6,000 closings.

Retailers are likely to decide to close as many as 25,000 U.S. stores in 2020, according to global market-research firm Coresight Research.

This is precisely what I am warning about. Some businesses have done very well, but the success of Amazon or Wal-Mart does not equate to success for the rest of the country. Some will do well while the majority suffer gravely.

This is not just limited to effects on the consumer market for store goods, but also is threatening to undermine the commercial real estate market. As I have noted before, the commercial real estate market is also burdened by debt like the US consumer, and when stores have to close because customers won’t spend, the landlords and the holding companies that own the properties where the stores were can no longer pay their bills to the bank, and they may lose their properties. The banks do not want this, because they they have to try an sell such property to another person, and the longer they hold it, the more likely it will be to be damaged beyond repair and may need to be demolished, which is another expense.

What I am emphasizing here is that which I have also warned before, and that is the real possibility of a ‘snowball effect’ where one problem tumbles into the next to the point that the US economy itself will be gravely harmed for the whole nation and will cause mass instability from the very rich to the very poor.

Many of the stores going dark are anchors and other tenants in shopping malls. Real-estate research firm Green Street Advisors LLC has forecast that more than half of all mall-based department stores in the U.S. will close by the end of 2021.

Landlords including mall owners Simon Property Group Inc. and Brookfield Property Partners LP have been stepping up, buying troubled tenants like J.C. Penney out of chapter 11, their third acquisition in four years of a bankrupt tenant.

The mall is arguably dead. A creation of the late 1960s and early 1970s (some might say the 1950s for some areas) as a part of the US consumer boom, many malls are going to cease to exist because of profitability issues. This is a national trend and will be interesting to watch as it continues to unfold. One can see this trend in real time in many malls since too often the malls are deserted, even on weekends, and those who are in the malls do not appear to be people shopping or families, but impoverished people or groups of questionable looking people too often doing questionable things.

More retailers are expected to seek bankruptcy in the fourth quarter, though the pace could slow as some hold off on filing in hopes of a profitable holiday season.

This is the “Christmas slay ride” I am warning about. I hope it does not happen because I do not want to see people lose their jobs and the economic situation get worse than what it already is. However, the facts are very dire and I do not see anything in the future, trend-wise, that will mitigate these effects.

Shaky companies that make it through the holiday season might survive only to encounter landlords that had agreed to rent deferrals but now want payment in full.

“That’s a huge bubble that is going to burst,” Mr. Graiser said.

As noted above, the landlords are in trouble too. The entire economy is in miserable shape, and at this point, we are looking at a possible future scenario of a ‘scramble for cash’ between corporations, trying to get from another or hold on to, through all legal and probably at some point questionable legal means, every last bit of cash that they can transfer to different entities before declaring bankruptcy and disappearing.

As I have said and I will continue to say, because the principle remains the same, is that people need to work as much as possible, pay down as many debts as possible, and distribute their money in the wisest way so to prepare for future debts and also to secure as many necessary provisions so to wade through an economic storm for, in the words of one contact I have who works in bond management for a major international corporation, probably about a ten years.

While these changes are unfortunate, there is little that can be done to stop them. It is for the wise man to, upon considering these reports, use the data to make intelligent decisions, as the consequences for failing to act may be severe.