You are here: Home › Major Russian Skinhead Known For Making Anti-Government Statements “Kills Himself” In Prison 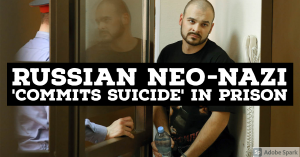 One of the trends that I have noted consistently is that in addition to the rise of socialism in all forms throughout the world and the return of Russia to the ways of the early twentieth century, there is also the return of old patterns of behavior.

Something that I noted, based on the experiences of people who lived in the USSR, was a consistent pattern of political dissidents, socially undesirable people, and others who mysteriously happen to “commit suicide”. I warned that this could be a major pattern going forward to watch for, as it was a part of the strategy used during the years behind the Iron Curtain.

Now from a story out of Lenta.ru, it has been noted that a major Russian skinhead with ties to various national socialist groups and organizations has now ‘committed suicide’ while in prison.

Maxim Martsinkevich , nicknamed Tesak, the most famous neo-Nazi skinhead in Russia and the creator of the Format-18 extremist organizations banned in Russia and the Restrukt movement, was found dead in a cell in a detention center in Chelyabinsk. According to the official version, the 36-year-old activist committed suicide, but Tesak’s relatives and those who knew him well do not believe this. (source)

I do not wish to defend his life or his actions. Shoebat.com has taken very clear positions about all forms of socialism, be it international socialism or national socialism, and has said that both are bad things with no good ends except death and destruction.

What interests me about this story was this pattern of ‘suicide’, as his family and friends strongly deny it.

A piece of paper covered with a pen is called the suicide note of Maxim Martsinkevich. Relatives of the deceased, who saw the photo with her, believe that the handwriting is really similar to that of Martsinkevich. However, none of them believe in the version of depression or other disorder, because of which Cleaver would kill himself ten months before his release.

Sources of “Lenta.ru” among people close to him claim that Martsinkevich was tortured, beating out a confession to the murders committed either in the late 90s, or in the early 2000s. Then he really was a furious teenage skinhead, but Tesak in those years was still unlikely to come of age, while the statute of limitations under the article “Murder” in Russia is no more than 15 years, and for a particularly grave, if we are not talking about a crime , for which a person shines a life sentence.

Now the investigators will have to figure out what happened to Tesak, but after information appeared about the initiation of a criminal case under the article “Driving to suicide”, a refutation immediately followed: so far only a check is being carried out.

As I noted, it does not matter what claims without evidence are about this man’s life, since the image that Russia attempts to present to the world about her prisons and the state of society versus reality are two extremely different things. American prisons are miserable and terrible, but this fact is well-known and discussed- it is not treated as some secret, and eventually, the truth does come out from under the lies. This is not so much in Russia, where prison is just as awful and like in nations who use a dictator-like approach to enforcing laws, prisoners are routinely abused in terrible ways by officials from the government and then bad attempts at lies are made to try and cover this up. If he did kill himself, it may have been that he was so physically and psychologically abused that he destroyed himself as a response to it.

The truth is that one does not know what happened to him, and given the intense secrecy that Russia places around information of internal matters, one will likely never know. However, the pattern of using ‘suicide’ as a substitute for saying ‘murder’ in an attempt at poorly deceiving the public is not uncommon, and therefore must be suspected as a real and indeed, also a strong possibility.

Likewise, there is no trust that one can put in “investigators,” because while Russians are smart people, the history of bluffing and then poor attempts at lying cannot be hidden. When the US lies, at least most often, the truth or most of the truth comes out, and is admitted eventually by the government. In Russia, this is not so, and “investigations” are even more politicized than those in the US. I have often used the example of “lysenkoism”, as this is a prime example of the mindset with what a sovietized Russia has approached the pursuit of things from politics and investigations to even basic scientific truths, which is that truth is merely an extension of what the current autocrat declares it to be, and it does not matter if it is objectively wrong, and to say it is wrong will result in potentially severe punishment or even death.

The question we have to answer is, did “Tesak” commit suicide or not? So far, based on the circumstances, statements, and history of the situation, while we cannot say ‘yes or no’, we can say that there are a lot of very highly suspicious circumstances that if not answered, will only fuel more doubts.

When public politics did not work out, Tesak, who was clearly a creatively gifted young man, created his first media project, Format-18. The one in this number is the first letter of Adolf Hitler’s name (A), and the eight is the first letter of the last name (H). It was finally formed only in 2005, when Tesak was 21 years old.

Skins from “Format-18” filmed their workouts in the gym, paramilitary training camp in nature, but the most popular content was videos of attacks on people of non-Slavic appearance. It is still not known exactly how many videos were staged and how many were documentaries.

In fact, Tesak’s studio was ahead of its time by several years. By the end of 2007, when Russian YouTube was launched, Martsinkevich was already known. He became one of the first in Russia to be made popular by the Internet. He had many offline imitators who attacked migrants, and not for the purpose of staging.

One cannot wonder if Tesak was being funded by the US, Germany, or another nation, noting the name similarity between Tesak’s group “Format-18” and the British national socialist group Combat-18 founded by the American Harold Covington. Likewise, his emergence onto YouTube as a major force in Russia beginning in 2007- a year that we at Shoebat.com have noted with interest in connection with the counter-jihad movement and other major nationalist entities that share direct ties to the governments of the Western World -and given the long-documented and even admitted overlap between concepts from to outright national socialist movements of the post-World War II world and the intelligence services in Western governments, it forces the above idea to be pondered. One cannot prove such from this article alone, but the overlap between this individual, events that have been known about for decades, and the events of the recent years as well as persons and affiliations are likely a study into themselves that would reveal much, and possibly this may have been the reason why he “committed suicide”, for it if really was a murder, than just as the entire purpose of Gladio was to establish “stay-behind” networks consisting of people who would delay a communist invasion until national troops could arrive, effectively making them proxy soldiers no different than ‘armed insurgents’, then was this the execution of a “proxy agent”?

We do not know for sure, save that there are a lot of interesting questions.

Thus, Tesak’s first ascent ended in prison. There is still debate about what goal he really pursued – to become a hero in news and cinema, or to really cleanse Russia of what he considered unacceptable. Andrei Kormukhin, the leader of the Forty Fortieth Orthodox movement, is inclined to regard him as a victim.

The Forty-of-Forty movement in Russia, noted above, that is associated with members of the Russian Orthodox Church is a movement also to watch, since given the overlap between the ROC and the Russian government I have noted, one may ask if the murder of Tesak was essentially eliminating one ‘agent’ to replace it with their own.

There are often many things that one cannot easily see taking place in the background. The case of Tesak, while it may be as simple as it appears and is being superficially presented as, may be a lot more complex in reality. One can never know, but there are more questions than answers, and in a case such as this, one cannot help but wonder what really happened.

Syrian Jihadists Are Terrified Of Fighting With The Armenians. One Jihadist Says: “The fighting isn’t like anything I have seen. It’s like a movie.”
The Armenia Azerbaijan Conflict Is A Proxy War Between Turkey And Russia. Turkey Is Using The War To Revive The Ottoman Empire
Follow