You are here: Home › The Republican Party Is Not Going Back To Normal, But Into Eclipse 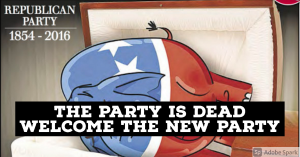 A lot has changed politically speaking, and according to the conservative publication The Federalist, the Republican party of the past is no more.

In 2016, Trump hijacked the Republican Party. Although he was billed as Republican, the support propelling him to victory was a new configuration of the electorate. Many mainstream Republicans still don’t understand this, but no other GOP candidate was going to win in 2016. Trump won because he was not actually a Republican.

Both the Republican and the Democratic parties are in the midst of internal civil wars. The extreme left wing of the Democratic Party is hurtling toward socialism and the destruction not only of statues but of American values and the fundamental principles of this country. Indeed, the escalating rhetoric currently employed by the left historically does not just silence dissent, it eventually seeks to eliminate the dissenters. America is in a struggle not only for its identity, but for its life.

While the left remakes itself, Republicans are engaged in their own struggle. When Trump won the White House, many of the anti-Trumpers of the Republican Party pivoted on a dime. For most, it wasn’t a unity move, but a power play for survival. Trump won, so the GOP decided to ride that wave. They stacked the White House with their people, promoted mainstream Republicans toward presidential appointments, and benefited as best they could from the electoral upset, but they never coalesced behind Trump or his new party’s plan for American renewal.

Four years ago, Trump understood something had to change in America, and now it is clear we are in more of a battle than we ever imagined. The unfolding facts of the elite bureaucracy’s attempted coup and the radical resolve of the far-left to destroy our institutions, our history, and perhaps us, too, requires a new kind of Republican.

Politicians today must be fighters. Although Trump is unique in his style, every politician who successfully follows after him in this new party will need to show Americans that he or she is willing to fight for the good of the nation with the same uncompromising and aggressive resolve. Politicians who can take on our new party’s platform will be winners in America.

The old Republican Party is dead. Trump supporters have witnessed the corruption at home and understand the threats we face from abroad, and we see that politics has changed. We cannot go back to “normal” if we want to turn this ship around. Trump’s new party is composed of people who still believe in the American dream for themselves and for each other. This new party is ready to do the difficult work necessary to peacefully but decisively, and without apology or compromise, return this country to its founding principles. (source)

There is a lot in this article that is not true, but the essence of it is that a fundamental change has taken place. I would like to point out one thing, which is that if Trump wins- and that is the most likely the case -that the Republican party will start to go into eclipse.

I am going to warn you- and I cannot say this enough -that with a Trump victory it nearly SEALS a Democrat 2024 victory. I am not trying to be brash, irrational or assume anything, but the current trends indicate this election is the last ‘horrah’ of the Boomers, and 2024 will see the rise of the Millennials, a generation who are inclined to all things of Sodom and which are going to vote in a much different way than the previous generations.

The Republican party has changed, but so have the Democrats too, and the trend for this will likley be shown after the election, when they will likely morph into a serious force to be reckoned with.

This election will be interesting, but the nexdt one will be one to mark down in the history books.