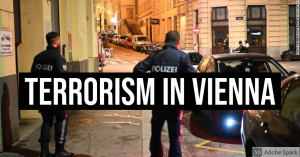 One person is so far pronounced dead and seven are injured in what CNN and other news outlets are reporting is a terrorist attack that took place in the city of Vienna.

At least one person has been killed and several injured in a suspected “terror attack” involving multiple attackers in central Vienna, say Austrian police.

One of the suspected attackers was also shot and killed, police added.

Austria’s Interior Minister Karl Nehammer has described the incident as a “terror attack,” and urged members of the public to stay indoors, as police try to find the attackers.

Gunfire erupted in the Austrian capital on Monday night, just hours before the start of a nationwide lockdown to combat a resurgence of Covid-19.

In a statement, police said there were several suspects “armed with rifles” and six different shooting locations. Multiple people have been injured in the city center.

“All possible forces” are responding to the incident, according to police, who are urging people to avoid the area and not to share photos or videos on social media.

“Shots fired in the Inner City district – there are persons injured – KEEP AWAY from all public places or public Transport – don’t share any Videos or Fotos!” Austrian police said on Twitter. (source)

Get Out The Popcorn, Because The Courts Are Already In The Show
Study: US Banks Are In Poor Health
Follow