You are here: Home › Study: US Banks Are In Poor Health 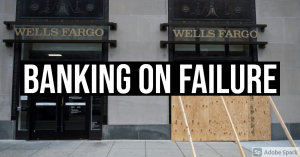 During the financial crisis of 2007-2008, much attention was given to the unhealthy state of the financial and banking system that lead up to the crisis that arguably still has not ended by way of the fact that the fundamental debt issues have never been sufficiently addressed. To that, given the added volume of money to the system, it has not solved, but magnified future problems.

Bloomberg by way of MSN Money discusses this problem, where it says that according to a recent study, it was again found that this trend of fiscal instability is truer now than ever as most major US banks are in poor health.

The largest U.S. banks are less healthy than they appear, boosted by temporary accounting and capital-relief measures as well as massive market support from the Federal Reserve, an advocacy group said.

Regulators have allowed banks to delay the hit to their capital ratios from billions of dollars in loan-loss provisions they’ve put aside this year. Massive increases in their holdings of cash and Treasuries are also temporarily excluded from the calculation of the leverage ratio, which has become the binding constraint for the largest banks during the pandemic.

Even if firms wouldn’t be on the precipice of insolvency without the support measures, the allowances have let most banks continue paying dividends, according to the advocacy group.

“We’re not in a 2008 situation where major banks are facing collapse, but we’re going into an uncertain future due to the pandemic, and the big banks aren’t in as good a shape as they appear,” Marcus Stanley, policy director at Americans for Financial Reform, said in an interview.

In addition to the accounting and capital-relief measures, the banks have also benefited from the Federal Reserve’s unprecedented intervention in capital markets, the organization said. That boosted their trading income by at least $19.6 billion in the first half of 2020, which has also helped them appear healthier than they actually are, according to the report. (source)

Note the highlighted text that I emphasized. This is what I am warning about. Financially speaking, the US is entering into uncharted waters, and given the lessons of the last crisis that obviously have not been learned, the future is going to become very difficult and will likely belong only to those who are prepared.