You are here: Home › Let The Election Games Begin, And States To Watch 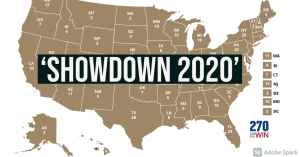 The election dog-and-pony circus is today, and leading up to it, I will be paying close attention to the ensuing mad house that is going to be this election. As noted, it is likely that one will see based on the current trends a Biden victory in the popular vote but a likely Trump victory by way of the electoral college. Nothing is known, so it is up to what comes to see who is determined the victor.

That said, The Hill notes five states that one needs to pay close attention to.

Democratic presidential nominee Joe Biden has multiple paths to 270 Electoral College votes, with polls finding President Trump struggling to hang on in some of the battleground states that accounted for his 2016 election victory.

Biden leads big in Wisconsin and Michigan, and the Democratic nominee has a clear but smaller lead in Pennsylvania, which will be at the center of the political universe between now and when votes are counted.

If Biden can rebuild the former “blue wall,” he’s likely to win the White House.

But Biden is also competitive in a handful of other states Trump must win to secure a second term, including Georgia, Arizona, Ohio, Florida, Texas, Iowa and North Carolina.

Not all of the states are expected to finish counting votes on Tuesday night, potentially leading to a few confusing days in which the vote count may appear to swing back and forth.

More than 95 million people have already voted and some states, such as Pennsylvania, will report the in-person vote count before moving through the absentee ballots they’ve already received. In North Carolina and Pennsylvania, mail ballots postmarked by Election Day will still be counted even if they are received a few days later. (source)

At this point GA, NC, and AZ in that order are the most Trump-inclined. FL is always a toss but likely will go to Trump. The big fights will be likely over MI, PA, and WI.

This election is going to be very interesting, but not like in 2024.

For now, I am going to sit back and watch this show, because right now it is daylight and the counts are not there yet.

Tonight is when things are going to get interesting, and if the current trends continue at the rates they are, expect the courts to potentially get involved in it.

Study: US Banks Are In Poor Health
Lara Trump: ‘Its Going To Be A Landslide Victory for Trump.’
Follow