You are here: Home › Biden Now Has To Look Down The Abyss Of The Economic State Of The Country 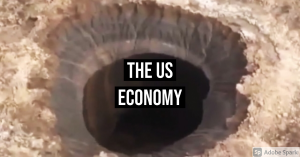 I said and will keep saying that based on the conditions of the economy, the loser of this election was actually the long-term winner, as it enables the other party to “pin the tail” on the “winner”, who will be blamed for the upcoming structural problems in the nation. Biden won the election, but now he has to deal with the problems- not caused by Trump, Obama, Bush II, Clinton, Bush I, Reagan, Carter, Nixon, or others alone -but from decades of bad policies compounded on top of the other ones that are coming to fruition very fast. The biggest one is the economy at which the heart is the unsolvable issue of the debt, either by default or by hyperinflation, both which have no peaceful resolutions.

Now as Bloomberg notes and is reported by Yahoo! Finance, Biden has to deal with the abyss of the economic problems.

Joe Biden has been elected to be the next President of the United States. Now he’ll have to get creative.

When the President-elect takes office, he’ll confront the country’s two most acute challenges: an ongoing Covid-19 pandemic and the economic damage it’s wrought. But he’ll have an uphill battle to enact the sort of bold policy agenda that many supporters were hoping for.

Barring a January surprise in Georgia’s runoff election, Republicans are likely to retain control of the Senate, denying Biden the unified control of government that his predecessors enjoyed when they came into office. With traditional relief and stimulus measures limited by opposition party intransigence, Biden might still be able to pass policies designed to resuscitate the stricken service sector directly.

The U.S. economy has bounced rapidly back since April, but only partially. Employment has only recovered about halfway to where it was before Covid-19 struck, giving it the shape of a reverse square-root sign:

Lower-wage employees, who tend to work at the local services businesses most deeply impacted by the virus, are suffering more.

The economy is being afflicted by two simultaneous maladies. The first is continued fear of the virus, now in the middle of a devastating third wave. Fear, more than lockdowns, has kept Americans shut inside their homes, reluctant to take the risk of going out to shop or eat. That in turn gives rise to the second problem of decreased demand, which filters through the entire economy.

Fear of the virus will eventually be reduced by vaccines, which may become available in early 2021. A national program of testing and contact tracing — which President Donald Trump long resisted — would also help speed Covid-19 on its way, and should be a priority for the incoming administration. But even when the virus is gone, the economy is likely to remain depressed for awhile, as the overhang of unemployment works its way out of the system.

Bold relief measures, of the type that sustained Americans through the pandemic’s dark early days, probably won’t be forthcoming given the GOP Senate’s inevitable turn towards austerity. The same is true of traditional fiscal stimulus, such as a burst of infrastructure spending, that might help boost demand back to normal levels. But there might be a chance for more targeted measures to help the sectors of the economy that Covid-19 has hurt the most — local services.

Restaurants, shops, and other establishments that cater in person to customers have gone bust in large numbers. After the threat of the virus has passed, the U.S. government might try to resuscitate local economies by subsidizing new shops to fill the empty storefronts that now dot America’s urban landscape. Some of these new establishments would be run by the same owners whose businesses went under during the pandemic, while others would be run by enterprising newcomers. But all would be able to draw on the local pool of unemployed, most of whom were working in these same types of businesses in 2019. (source)

I have told you at Shoebat.com many, many times and I will keep saying it, which is that the heart of the problem is the DEBT, it is related to no one president directly, but it is going to have to be dealt with, and NO president can address it without political suicide for himself and his party.

This is where I say the Republicans were smart, strategically speaking, in this election. So what if Biden’s people cheated to get him in? By removing Trump, it not only allows the Republicans to clean up their image and rebrand themselves, but it prevents the serious debt issues from being dumped on them. It’s now Biden and Kamala’s problem.

I cannot predict the future, but I do warn that based on patterns established already, there is a strong chance of a serious currency crisis in the future because- and this has been true of Trump as well with his COVID stimiulus bill, Obama’s monetary policies, TARP under Bush II, the derivative (Commodities And Futures Modernization Act Of 2000) bills under Clinton -the only thing that Biden can do to solve the problem is to use the only tool that the government has, which is to print money.

That’s all he can do- print money. Eventually, this will cause the currency itself to collapse in value as it does no matter who is in charge.

I am not saying this WILL happen under Biden. I am saying that the patterns show- just as it would be the same if Trump won a second term and was in the same positions -that Biden may be forced to catch this “hot potato” and hold it. However, this hot potato destroys political careers, whole parties, and even governments.

UK Military Commander: COVID Could Bring About A Third World War With Robots
Biden Declares “230 Million Thousand” Americans Lost A Loved One TO COVID-19, Will “Make You To Sign Like The Sun”
Follow