You are here: Home › UK Military Commander: COVID Could Bring About A Third World War With Robots 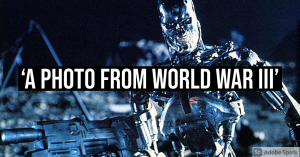 This report was originally from the UK Sun, and while I often do not like to reference pieces from them, this one is with note, because as Shoebat.com has pointed out, pandemics often precipitate major regional or even global conflicts in various forms. As such, it is with great interest that a UK military commander has said EXACTLY what we at Shoebat.com have been warning, that COVID could bring about a third world war in which soldiers find themselves facing off against robots.

COVID could spark a third world war – and an army of 30,000 robots could fight in the future, the UK’s most senior military commander says.

General Sir Nick Carter made the claims about the future of the British forces as he warned the economic fallout of the pandemic has made the prospect of World War Three a “risk”.

And the chief of the defence staff said that the country’s 82,000-strong Army will begin to look different as it modernises to face new and emerging threats – with “robots” potentially fighting on the frontlines.

Sir Nick made the comments when asked by Sky News in the run up to Remembrance Sunday whether he feared the global economic crisis brought on by coronavirus could lead to war.

He said he’s worried the increase in regional conflicts playing out across the world could ramp up into “a full-blown war”, mirroring the run-up to the two world wars.

The senior official argued that, with the world being “a very uncertain and anxious place” during the pandemic, there was the possibility “you could see escalation lead to miscalculation”.

We have to remember that history might not repeat itself, but it has a rhythm,” he said.

“If you look back at the last century, before both world wars, I think it was unarguable that there was escalation which led to the miscalculation – which ultimately led to war at a scale we would hopefully never see again.”

Asked whether he was saying there was a “real threat” of World War Three, he replied: “I’m saying it’s a risk and we need to be conscious of those risks.

“And that’s why Remembrance matters, because if you look back at history, hopefully you learn from their experience and you make sure that you’re very cautious about how you manage the sorts of regional conflicts that we see playing out in the world today.”

Asked about the future of the Army, he said he wants a force “designed for the 2030s” – but admitted: “We won’t get there overnight.”

And he said the service will have “all manner of different people employed” – including “robotics”.

“Nobody can predict the future, or quite what mix of technology will be necessary to achieve that,” he said.

“We need to open our minds to numbers [of personnel] not determining where we’re going.” (source)

Read this whole piece carefully, because this summarizes, in the words of a military commander, the trends that we are seeing at Shoebat.com.

World War III, and against robots.

This is outright something from Terminator, and the warning signs of it are being noted by the highest ranking military personnel in major armies.

It’s not a joke or an exaggeration or a conspiracy. It is real and something to be concerned about.