You are here: Home › Biden Declares “230 Million Thousand” Americans Lost A Loved One TO COVID-19, Will “Make You To Sign Like The Sun” 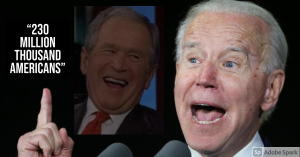 I have warned that the Biden presidency, like that of Bush 2000, is going to be filled with all kinds of gaffes, except this time instead of “Bushisms”, it’s going to be “Bidenisms”, and likely more intense because of the clear signs of age-related mental decline. Many have already hear such things from him such as his “lying dog faced pony soldier”, “you ain’t black”, and “fat” comments, but in what appears to be his first gaffes as now President-elect, Biden said that “230 million thousand” Americans lost a loved one to COVID-19, and then misquoted the hymn “On Eagles Wings” to say, instead of “…make you to shine like the sun…”, instead to the phrase “…make you to sign like the sun…”. The clip begins on 13:24 and goes to about 14:24.

It is going to be a very entertaining four years.

Biden Now Has To Look Down The Abyss Of The Economic State Of The Country
Fine Print: Trump ‘Election Defense Fund’ Also May Be Used To Pay Down Campaign Debts
Follow