You are here: Home › Fine Print: Trump ‘Election Defense Fund’ Also May Be Used To Pay Down Campaign Debts 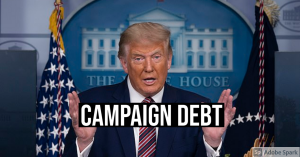 One of the interesting points uncovered by the Trump tax returns is that President Trump, in spite of his claimed wealth and appearance of wealth, is heavily indebtted, and has tens to hundreds of millions in loans which he is personally liable for. This did not so much affect the election for or against him, but rather is an insight into the state of the man’s personal life and the image of his business empire as it seems it could crash down around him amid his tax and debt obligations.

Because of this, it is of more interest that Trump’s “Election Defense Fund”, as USA Today reports, has “fine print” language written into it that monies donated could be used to pay down his campaign debts.

In the Trump campaign’s latest push to raise money for its “election defense” fund, at least half of any donation could go toward paying down debt for the president’s campaign, according to the fine print.

The Trump campaign has mounted legal challenges in several battleground states that show Democratic challenger Joe Biden ahead as votes continue to be tallied in the tightly contested presidential race, including Michigan, Pennsylvania and Georgia.

Over the last four days, the Trump campaign as well as the Republican National Committee have sent a flurry of text messages and emails urging supporters to contribute to the president’s court challenges.

“President Trump is FIGHTING BACK to defend the integrity of this Election, but he can’t do it alone,” one email reads. “He needs YOU to step up and join him by contributing to our critical Election Defense Fund.”

A separate fundraising effort by the “Trump Make America Great Again Committee” states that 60% of contributions will go toward campaign debt while 40% goes to the RNC.

Joe Biden’s campaign has also launched a fundraising effort in anticipation of a drawn-out legal battle. While the fine print does not include any disclaimer about retiring campaign debt, it does indicate that a portion of the donation would go toward the Democratic National Committee and the remainder would benefit the former vice president’s recount account. (source)

This action suggests that Trump really is in a form of financial trouble, and that he is trying to offload what debts he can right now before his personal situation becomes even worse.

What happens after Trump leaves office is going to be a very interesting thing to watch- assuming the current conditions. Yes, it is possible there will be a serious legal challenge, but so far, I have yet to see any real ones be accepted. Instead, there is a lot of anger on the right, which is far more effectively consolidating support on the right base and is useful for rebuilding, rebranding, and reviving in the exact same chance that Democrats were afforded should they have lost (and likely under natural circumstances would have) and would have been able to come back with a vicious force in 2024 to write a new chapter in history for themselves.

It’s not “Trump” that is the real concern. It is how this election is producing the conditions for a renewed nationalism and with that, the emergence of a new right wing more akin to a Bannonesque view of politics than the traditional Boomer conservatism.

Biden Declares “230 Million Thousand” Americans Lost A Loved One TO COVID-19, Will “Make You To Sign Like The Sun”
Italy Gives Legal Protections To Sodom
Follow