You are here: Home › Italy Gives Legal Protections To Sodom 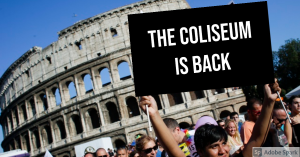 According to Reuters, Italy has now given legal protection to sodomite behavior.

Italy’s lower house of parliament on Wednesday passed an anti-discrimination bill that makes violence against women and LGBT+ people a hate crime, with those found guilty of such attacks risking longer prison terms.

The bill was approved by 265 votes to 193 in the 630-member chamber and now needs a final green light from the upper house Senate, where it has the support of the ruling coalition parties, before becoming law.

It modifies an existing law punishing offences based on someone’s race or religion with up to four years in jail.

“It is a big step forward against discrimination, hatred and violence,” Alessandro Zan, the openly gay lawmaker who promoted the law, wrote on Twitter.

The change was championed by the centre-left Democratic Party (PD), but faced opposition from right-wing parties and the Italian Roman Catholic Church, which said existing protections were strong enough.

The conservative campaign group Pro Life and Family has said the bill will make LGBT+ people “more equal than others”, while Italian bishops warned last June that the new law could curb dissenting opinions, including that a family requires the union of a man and a woman.

Zan has denied that the bill would impinge on free speech, saying it would only punish those who incite hatred. (source)

One of the trend warnings that Shoebat.com has emphasized is that in a major global conflict, Europe is likely going to be ripped apart again. As a part of this, Italy is probably going to be hit hard by Germany, and there is a possibility that Italy may see another Sack of Rome a-la what happened in 1529.

Moral truth does not change with human desire, personal temperament, or government in power. There is a tremendous amount of sodomite-linked sexual abuse of men in the Church, and it goes directly into Rome itself and the power echelons in the Vatican. This does not speak to the moral teachings, but rather to other issues of power and at its ultimate root, the fight between good and evil itself.

The legalization of sodomite behavior it Italy is not just anti-Christian, but may further instigate anti-clerical ideas and result in a large number of priests- the good and the bad alike -being put to deaths by soldiers, most likely dancing the Schuhplattler to the sounds of the accordions.