You are here: Home › American-Russian Professor Predicts Major US Collapse 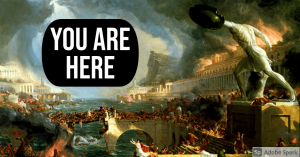 Shoebat.com has said that the 2020s are going to be a decade of escalation leading to major global conflict, and unfortunately, the signs point that one of the processes we will witness is the continued decline of the American empire that will culminate in another world war.

Peter Turchin, a professor at the University of Connecticut, recently was interviewed by The Atlantic, where he said that the US is too late to fix her problems, and that collapse and conflict is guaranteed at this point.

The fate of our own society, he says, is not going to be pretty, at least in the near term. “It’s too late,” he told me as we passed Mirror Lake, which UConn’s website describes as a favorite place for students to “read, relax, or ride on the wooden swing.” The problems are deep and structural—not the type that the tedious process of demo­cratic change can fix in time to forestall mayhem. Turchin likens America to a huge ship headed directly for an iceberg: “If you have a discussion among the crew about which way to turn, you will not turn in time, and you hit the iceberg directly.” The past 10 years or so have been discussion. That sickening crunch you now hear—steel twisting, rivets popping—­­is the sound of the ship hitting the iceberg.

Elite overproduction creates counter-elites, and counter-elites look for allies among the commoners. If commoners’ living standards slip—not relative to the elites, but relative to what they had before—they accept the overtures of the counter-elites and start oiling the axles of their tumbrels. Commoners’ lives grow worse, and the few who try to pull themselves onto the elite lifeboat are pushed back into the water by those already aboard. The final trigger of impending collapse, Turchin says, tends to be state insolvency. At some point rising in­security becomes expensive. The elites have to pacify unhappy citizens with handouts and freebies—and when these run out, they have to police dissent and oppress people. Eventually the state exhausts all short-term solutions, and what was heretofore a coherent civilization disintegrates. (source)

Take his words for what they are, but do consider that given all of the economic, social, and cultural problems that I have pointed out continually and which are not being resolved, that things are going to get a lot harder in this country.

Please prepare accordingly and keep a close watch on what is happening, for as always, things can happen very fast when major change is taking place, and that is when accidents often happen.