You are here: Home › Trump Supporters Prepare To Descend On Washington For “Million MAGA March” 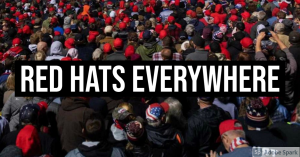 As tensions rise between Democrats and Republican supporters over the election results WWJ News Radio reports that pro-Trump supporters are planning a “Million MAGA March” in support of Trump.

Supporters of President Donald Trump plan to descend on Washington DC Saturday by car and bus to support their candidate in the Million MAGA March.
Articia Bomer of Detroit will be among them, and she’s organizing a caravan of other like-minded folks from the city to join her. For Bomer, the issue she wants to support is Trump’s unproven claims of flagrant voter fraud.

“Well, they’re marching to Stop the Steal because as well all know there was a lot of voter fraud going down at TCF in Michigan, so we’re going there for support, a caravan of us, and we’re going to support our president,” she said on WWJ 950.

No evidence of voter fraud has been discovered despite Trump’s repeated claims, and lawsuits with that allegation have been tossed out in Michigan and across the country. Michigan Secretary of State Jocelyn Benson has affirmed repeatedly the voting process was fair and transparent, and says any lie to the contrary is an attack on democracy.

Still, a large crowd of supporters is expected to converge to march from the Supreme Court to the White House. “I think it’s going to be quite large from what I’m hearing, don’t have an estimate for you,” White House press secretary Kayleigh McEnany told Fox News when asked about the event.

The main gathering is scheduled to start at the Freedom Plaza in downtown Washington, D.C., at 12 p.m. with a march to the Supreme Court at 2 p.m.

DCish reports groups involved include Stop the Steal DC, the Proud Boys and Oath Keepers, according to a report by DCist. But for Bomer, turning out is less about a cause and more about a man.

“Trump is amazing, he’s not a politician. Joe Biden, Kamala Harris, they’re politicians. They know how to do all the dirtiness. Trump was sent here to make American great and he was doing a great job,” Bomer said.

Bomer added she doesn’t believe election officials when they say the vote wasn’t tampered with. “I would say they don’t know what they’re talking about and we’ll just wait and see,” she said. “We have court cases pending and right now we’re putting it in front of justices to be accurate and precise and get to the truth.”

A counterprotest called “F— MAGA” has also been planned to happen nearby. (source)

It is likely that this protest will not help anything. In fact, it may serve to isolate, in terms of public appearance, the Trump movement and support for the Republicans. However, this is what seems to be most politically advantageous, remembering that the loser of this election is the winner because of the upcoming debt problems.

If anything, these protests are a sign of things to come, which is a rising and even more radical right wing than before that could lead to intra-national violence on political lines.